With no playoffs and few teams in realistic contention, dead rubbers set to abound 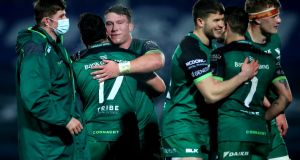 Connacht’s Matthew Burke and Conor Kenny celebrate victory over Leinster at the RDS. Despite their superb win and Munster’s defeat by Ulster, Connacht are probably in must-win territory when they host Munster. Photograph: James Crombie/Inpho

In deservedly ending Leinster’s 26-game winning run in the competition and their near two-decade wait for a win over the back-to-back champions in Dublin, Connacht not only kept their hopes of winning the competition alive but also saved the Guinness Pro 14 season, for another week at least.

This follows the organisers’ decision to make much of the run-in meaningless. These are, of course, difficult times for all sports bodies with the coronavirus pandemic grimly continuing to hang over rugby in 2021, with the British and Irish Lions tour in particular jeopardy.

Yet the desire to shoehorn another one-off hybrid competition into the 2020-21 seasonal itinerary, the so-called Rainbow Cup featuring the four South African super franchises, comes at a significant cost to the Pro 14 (which, in reality, for this season is a Pro 12).

For sure there are strong financial imperatives at work in fast-tracking the four South African franchises into what it is to be hoped will become a Pro 16 in 2021-22. The South African Rugby Union pay a participation fee in order to take part in the Pro 14/16 and this is estimated to be in the region of €6 million per season.

The Rainbow Cup is also designed to serve as a dry run for next season’s Pro 16 and have South Africa’s frontline rugby players earn some badly needed game time in advance of the proposed eight-match Lions tour from July 3rd to August 7th.

However, on the premise that the Lions tour, much like the Olympics, will be deferred for a year and postponed until the same dates in 2022, the situation in South Africa could also make the Rainbow Cup a risk not worth taking. Of course, professional teams in Ireland, Wales, Scotland and Italy, along with those in South Africa, can operate in bubbles, and in the continuing absence of fans this would also restrict the number of people travelling between those countries.

Presumably the Pro 14 organisers also have contingency plans in place in the event of the Rainbow Cup biting the dust. Furthermore, it wasn’t viable to incorporate the South African quartet into a 2020-21 Pro 16. Whereas a completed Pro 14 would contain 152 matches, the combination of this abbreviated Pro 12 plus Rainbow Cup will, in theory, result in 154 matches.

Nonetheless, while the Rainbow Cup is due to start on April 17th, who’s to say travel will even be permitted by governments at that juncture?

But should it come to pass that the Rainbow Cup is called off without a ball being kicked at short notice, the Pro 14 organisers could be left with plenty of egg on their faces if by then their abbreviated 2020-21 tournament is already completed. The Pro 14 final has been brought forward to March 27th.

As it is, by accommodating a notional Rainbow Cup, the organisers of the Pro 14 have sacrificed two ‘quarter-final’ playoffs and both semi-finals. This will have profound effects. Instead of still having a theoretical interest in the knock-out stages, the Ospreys, Dragons, Glasgow and Zebre have little to play for, and ditto Cardiff, Edinburgh and Benetton.

Yes, final standings will still determine qualification for the 2021-22 Heineken Champions Cup. It could also be argued that so poorly have pretty much all bar the Scarlets of the non-Irish sides performed that they scarcely deserve to have much viable interest in the knock-out stages anyway.

But even so, why disabuse them of having anything tangible to play for by trimming the playoff stages to just two teams, namely the conference winners, instead of six?

The net effect is that of the remaining 44 games left in the two Conferences, in only 26 of them – at most – will one side have a realistic shot at the playoffs. In truth, that figure will likely prove even less.

That leaves an awful lot of games which, in terms of the reaching the playoffs, will now be rendered dead rubbers.

Furthermore, as things stand at most only five games – namely the five Irish derbies – will feature matches where both sides still have a tangible interest in the destiny of the title.

Even that figure will be reduced if Munster beat Connacht in the Sportsground next Saturday evening as, realistically, despite their superb win in the RDS and Munster’s defeat by Ulster, Connacht are probably in must-win territory.

They trail Munster by eight points after eight matches apiece, but if that gap was widened to 11 or 12 points, then the odds against Connacht winning Conference B and reaching the final would lengthen even further.

Of Connacht’s ensuing seven games – the outstanding fixtures have still to be finalised – four are away, including trips to the Scarlets and Munster in the return fixture.

As for Conference A, Leinster remain strong favourites to win it with the bookies, but almost unthinkably they trail Ulster by 10 points, albeit with two rearranged games in hand.

However, given those games are away to Munster and the Scarlets, Leinster’s need is the more acute when they host Ulster at the RDS this Friday evening. Were Dan McFarland’s team to win and extend their lead to 13/14 points, they would be in the box seat.

Leinster would probably have to win their remaining seven games, including away matches against Munster, Scarlets and Ulster, for whom the Pro 14 now looks a bigger prize than the Champions Cup.

In any case, whereas pretty much every side bar the Italian duo might still have retained a theoretical interest in the title via the playoffs at this juncture, the decision to do away with the latter is reflected in odds for the 2020-21 Pro14, with Leinster still 8-15 favourites, Munster at 11-4 and Ulster 5-1 with one bookmaker.

Andy Friend’s Connacht are 80-1 fourth favourites to lift the trophy, with the Scarlets at 100-1. Barely past the halfway point, with 52 games played and 44 remaining, they see it as a three-horse race. That’s a lot of dead rubbers all right.