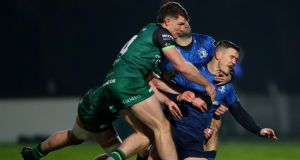 Connacht’s Peter Sullivan and Leinster’s Johnny Sexton during the Pro14 clash at the RDS where Leinster slumped to a surprising home defeat. Photograph: James Crombie/Inpho

Leinster backs coach Felipe Contepomi explained that “we’ll be as strong as we can” when asked whether there would be any selection constraints because of the national player management programme ahead of Friday night’s Guinness Pro 14 game against Ulster at the RDS (7.35).

The bulk of the province’s international contingent, at least those fit and available, will return for a game that Leinster simply must win. Contepomi said: “We’re starting to get everyone back. We’re playing against the in-form team in Pro 14 so it’s a big, big test for us.

“I’d say it’s nearly [like] a playoff game. It’s not that it will decide everything but they are 10 points ahead of us, although we have two games in hand and we are direct competitors in that conference so definitely it’s a big game for both [teams].”

Leinster’s defeat to Connacht, a first in 26 league matches, made for a painful review on Monday morning, albeit that there was no time to dwell on the disappointment.

Contepomi admitted: “Fair play to Connacht, on the day they beat us in every aspect of the game, so there’s a lot for us to learn from that game.”

He was then asked about head coach Leo Cullen’s post-match comments that Leinster didn’t match Connacht’s physical intensity and whether it was a trade off when playing a number of younger players.

Contepomi explained: “I’d say he [Cullen] was referring more to the physicality up front and it wasn’t the back three where we were beaten on physicality.

“I know they outplayed us in the back three as well, but up front where we were beaten on the physicality we weren’t that young. All over the park we were surprised by the intensity, there’s nothing to get shy about, they were much more physical, had more intensity and beat us in every aspect of the game.

“Then, maybe the lack of experience in some areas of the pitch, we started chasing the game too early when we didn’t have to and needed a bit more composure. That didn’t help us moving into half-time, because we gave [up] a last try trying to get out of our half by playing rather than having more composure.

“I hope we take these learnings. For the young boys it will be great, for the more senior guys, I wouldn’t say it’s a wake-up call but it could be good in the long run.”

Two 20-year-olds, fullback Max O’Reilly and wing Andrew Smith, made their debuts – so too replacement prop Greg McGrath – but didn’t really get an opportunity to showcase their attacking talent.

Contepomi said: “It’s hard for them, they’re performing for the first time and you could see they have great potential and [also have] a lot to learn. They are good footballers, good players and guys. It was on us and the more experienced guys to make that day a special day for them, but it didn’t happen.

“That’s one thing we need to look at as a squad. For them they need to keep trucking, realising the level they need to be at, the skills they need to have and the intensity they need to play at; a defeat is never welcome, but if it’s a learning point it’s a good thing in the long term.

“We have a few more players coming back from resting periods; the intensity has to go up. It is not only because we have lost. It is the games we are heading into, three crucial games for us defining our season. It’s great, the intensity is up and everyone in the camp is buzzing.

“We tried to set the highest standards we can and we have been under those standards in the last game. It’s getting back to where we think we should be.”