Champions back to full strength for important Ulster clash 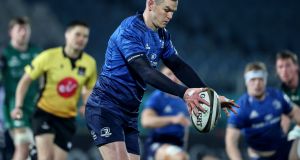 Johnny Sexton: has recoverd from concussion and returns to the Leinster team to face Ulster at the RDS. Photograph: Dan Sheridan/Inpho

Hype is a dangerous thing, but this interprovincial derby deserves all the fanfare we can muster. Above all else, the game gives people something to be doing with themselves but, in terms of the Pro 14, it truly does matter.

Ulster have a rare opportunity to stymie Leinster’s pursuit of the four in a row. This could conceivably occur if the ferocity and accuracy Connacht brought to Ballsbridge last Saturday is replicated by Dan McFarland’s men.

“We had a pretty young and inexperienced group last week but I think it will stand to those guys in time as long as they learn the lessons from the game,” warned Leo Cullen after naming 14 established Ireland internationals and Scott Fardy, the old Wallaby war horse.

Hell hath no fury like the champions scorned, but this underwhelming competition needs an Ulster victory.

McFarland, who has just signed a two-year contract extension, sends a very beatable side to Dublin.

But you never know. The pressure is all on Leinster after mid-season alterations to the Pro 14 structure means only the winners of each conference will progress to a grand final on March 27th.

With Leinster trailing the unbeaten Ulster by 10 points in Conference A, albeit with two games to spare, a second interpro defeat in succession would at the very least revive some of the dead rubbers on the existing schedule.

The team Cullen has selected – besides the oddity of Ross Byrne wearing number 13 – suggests the failings that allowed Connacht sack the RDS will be ruthlessly corrected.

Johnny Sexton has recovered from symptoms of concussion to start at outhalf despite being forced off after 23 minutes six days ago. Jordan Larmour’s return from shoulder surgery, just in time for the Six Nations, is more encouraging.

Hugo Keenan starts at fullback with Larmour on the right wing but the Byrne brothers, Ross named at centre and Harry on the bench, are equally curious decisions by Cullen. The coach with the greatest resources at his disposal must risk Jimmy O’Brien among the replacements despite a shoulder knock.

It feels illogical to invite the increasingly impressive James Hume to charge at Byrne in midfield so expect Robbie Henshaw to defend the outside centre channel with Byrne and Sexton alternating as first receiver. Also expect plenty of tactical grubbers and cross field punt passing to examine Michael Lowry’s positional sense.

“How these three guys set up – Johnny, Ross and Robbie – we’ll keep everybody guessing,” said Cullen who has been forced to name this unorthodox midfield by a wounded list that is fast approaching unprecedented numbers.

“Particularly in the backs,” Cullen admitted. “Adam Byrne hasn’t played this year. Conor O’Brien is another. Tommy O’Brien had that ankle surgery. James Lowe is getting closer, he might return to training at some point next week.

“Garry [Ringrose] obviously with his jaw, he comes back and he injured himself again, so we have a fair old injury list. A few retirements at the end of last season [Fergus McFadden and Rob Kearney] as well.

“Every team goes through these phases. This year there are a few added challenges with Covid-related issues as well but overall we are just trying to focus on these three weeks now.”

The Paul O’Connell factor can be added to the interpro pot from now on. In case you missed the news, the former Stade Francais lineout technician has been added to the national ticket as forwards coach. O’Connell’s primary brief – to transform James Ryan into an international-calibre lineout caller like the 41 -year-old was in his heyday – starts immediately.

McFarland baulked this week at the mention of so many Leinster-reared players in his squad but the fact remains that nine of them are travelling south for this match.

Jacob Stockdale is absent due to a knee injured sustained in victory over Munster so Larmour and Hugo Keenan are getting a clear run at making the Ireland team that plays in Wales on February 7th.

Connacht overcame Leinster with a combination of suffocating defence and slick tactical kicking by Jack Carty. If Billy Burns wants to remain in the outhalf conversation, the former England under-20 must surpass Carty’s impact here. With Stuart McCloskey and Hume over one shoulder and Marcell Coetzee and Jordi Murphy over the other, Burns’s split-second decision-making could determine the outcome.

Dan Leavy and Will Connors failed to make the cut in Leinster’s backrow so Rhys Ruddock must continue his career defining form alongside Josh van der Flier and Caelan Doris before Jack Conan makes his presence felt.

On paper, Leinster have plenty to spare. In reality, Leinster by whatever margin is determined by a combination of Sexton’s health and Ulster’s physicality.