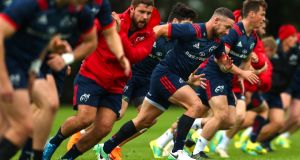 Munster have made eight changes to their team to face Ulster at Thomond Park on Saturday night.

Haley starts at fullback with Andrew Conway and Earls on the flanks. Rory Scannell partners Goggin in the centres with outhalf Joey Carbery alongside Mathewson in the half-backs.

Kilcoyne, Niall Scannell and Stephen Archer make up the front row with Holland returning from injury to partner Tadhg Beirne in the secondrow.

Captain Peter O’Mahony, O’Donnell and CJ Stander complete the side.

Meanwhile Ulster prop Andrew Warwick will reach the 100 cap milestone, with fellow Ballymena RFC clubman Adam McBurney selected for his first start of the season beside him at hooker. Ross Kane completes the front row.

Alan O’Connor will captain the side from the secondrow, with Iain Henderson returning to partner him in the engine room.

In the back row, flankers Matthew Rea and Nick Timoney are named at blindside and openside respectively, with Jean Deysel packing down at number eight.

John Cooney returns from the scalp laceration sustained in the win over Southern Kings a fortnight ago to join Billy Burns at halfback. Angus Curtis will also earn his first start of the season, as he is given the nod to partner Darren Cave in midfield.

Wingers Angus Kernohan and Craig Gilroy join Peter Nelson in the back three as the fullback runs out for the 50th time in an Ulster jersey.