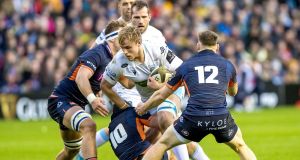 Scotland star Jonny Gray believes it is the right time to move on from Glasgow after confirming he is to join Exeter this summer.

The giant 6ft 5in lock has been a major performer for both Warriors and Gregor Townsend’s Dark Blues with his ferocious work-rate and soaring tackle counts.

And he is now set to add those qualities to Rob Baxter’s team after agreeing his Sandy Park switch on a two-year contract.

“I’m looking forward to the challenge,” said Gray, who has been with the Warriors since 2012. “I see the move not only as a chance to experience something new, but at the same time it’s a chance for me to develop myself, not only as a player, but as a person.”

The secondrower helped Glasgow lift their one and only major title so far with their 2015 Pro12 triumph.

But Dave Rennie’s Warriors have been hit by a number of key departures in recent seasons and look likely to miss out on both the Guinness Pro14 play-offs and Heineken Champions Cup quarter-finals this season.

Chiefs – last season’s Gallagher Premiership runners-up – are one of the teams standing in Glasgow’s way in Europe and they are set to meet at Scotstoun next weekend.

But Gray is now looking forward to his summer switch to Devon, where he will be reunited with former Warriors team-mate Stuart Hogg.

The 25-year-old – brother of former British and Irish Lion Richie – said: “Obviously, I’ve come up against the Chiefs in the past and I know just how tough a side they are and what the set-up is like down in Exeter.

“You can see how well they have done in recent years and at this stage in my career, I just feel it’s a great opportunity for me.

“I know I still have a lot to learn as a player, so hopefully the change of club will allow me to add new things to my game.

“Leaving Glasgow will be tough. I love Glasgow and I’m so grateful to the club and so many people associated with the club for all they done during my time there.

“Without doubt this was one of the toughest decisions I’ve ever had to make – and I will be giving everything between now and the end of the season to ensure my time there finishes on a high.

“I’ve spoken to both Hoggy and Skins [Sam Skinner] and they’ve both said what a great club it is.

“Hoggy says he’s loving life down there and he’s enjoying the challenge of being at a different club. Talking to both of them, as well as Rob Baxter, I just felt it’s the right move for me at this time in my career.

“You can see the Chiefs have a great environment and a great culture and that’s very much what Glasgow is based around. The togetherness they have as a squad is clear to see, on and off the field, so it will be good to be a part of that moving forward.”