Momentum all with the Springboks 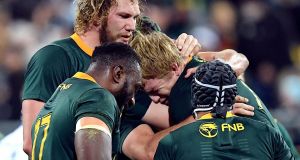 A surprise away win over New Zealand has provided a timely injection of enthusiasm into South African rugby when it seemed the Springboks were continuing the poor form that has beset them since finishing third at the last World Cup.

The shock 36-34 victory against the world champion All Blacks two weeks ago came after disappointing Rugby Championship results in Argentina and Australia, catapulting the Boks into contention in the southern hemisphere competition. But if the Wellington win is to have any impact, they will have to beat the Wallabies in Port Elizabeth on Saturday to set up a potential decider for this year’s crown in a return against the All Blacks in Pretoria on October 6th.

The arrival of former Munster coach Rassie Erasmus, and a 2-1 series win over England in June, suggested positive changes for the Boks after two miserable years in which they plummeted down the world rankings, losing to Italy and suffering a record 57-0 loss in New Zealand along the way. But the new-found optimism quickly drained after Argentina beat them 32-19 in Mendoza last month and the Boks made some horror mistakes to go down 23-18 to the Wallabies in Brisbane.

However, after beating the All Blacks, the fervour is back and sellout crowds await the home team on Saturday at the Nelson Mandela Bay Stadium and next weekend against New Zealand at Loftus Versfeld. But there are still questions about South Africa’s consistency, as scrumhalf Faf de Klerk admitted. “We don’t want to be a team that beats New Zealand one week and then plays mediocre rugby the next,” he said.

It means having to put away the euphoria of a rare win over the All Blacks and concentrating on beating Australia, who are under pressures of their own. The Wallabies’ loss at home to Argentina last time out was also a surprise and added to growing criticism of coach Michael Cheika, one year out from the World Cup in Japan.

Australia are bottom of the Rugby Championship standings, sitting on five points behind New Zealand (16), South Africa (10) and Argentina (8) and have won only two of their last nine games. But they will be hoping to catch their hosts in over-confident mood and earn a win that will go a long way to boosting their confidence.