All Blacks poised to bounce back in Buenos Aires 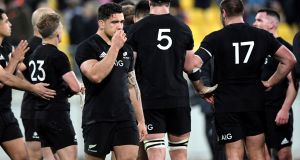 The All Blacks have never lost to Argentina but Saturday’s clash looks more balanced than their previous encounters and both teams have reason to believe they can record what would be momentous victory.

While a bonus point win would clinch a third successive Rugby Championship title for the world champions, a loss would be a first in 28 matches against the Pumas and condemn the All Blacks to their first back-to-back defeats since 2011.

Steve Hansen made has seven changes to the squad that lost 36-34 to South Africa last time out, including Sonny Boy Williams in the centres for the first time since June and naming Sam Whitelock as captain in place of the rested Kieran Read.

The All Blacks, as always, start as strong favourites and will be going all out at Velez Sarsfeld to make amends for their narrow defeat to the Springboks, a first in the championship since 2015.

“I think as players we were disappointed with how we performed (against South Africa) but I think the big one is we probably let ourselves down,” Ben Smith, who moves from the wing to fullback, explained. “As players we are excited to get out there and show we are a better team.”

Argentina have made only two changes to the side that beat Australia on the Gold Coast two weeks ago, with Ramiro Herrera coming in at prop and centre Bautista Ezcurra joining a backline to allow Matias Moroni to play on the wing.

The win over the Wallabies added to their home victory over South Africa in August, the first time they have beaten two of their rivals in one championship since they started competing against the southern hemisphere’s rugby superpowers in 2012.

Under new coach Mario Ledesma, the Pumas have added more pace and flair to their traditional strength up front but they still lack depth and have struggled to see out matches from winning positions, especially against New Zealand.

They will have the backing of a raucous sellout crowd of 50,000 in the Buenos Aires suburb and coach Hansen is not taking them lightly.

“We’ve always been wary of them, they are a strong side physically but what we’ve seen I think change in them is the mindset in how they want to play the game,” Hansen said.

“I think they’ve decided that they’ve got backs of real calibre who can hurt you if they’re given opportunity to do so.

“They’ve come over and scored some good tries against us, so again taking confidence out of that. And then they beat Australia so they arrive on Saturday as a very confident team and that makes them dangerous.”