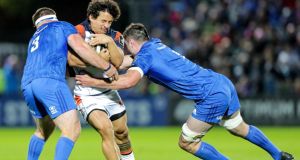 Leinster head coach Leo Cullen has confirmed that 22-year-old lock James Ryan suffered a concussion at the end of the first quarter of the side’s 31-7 bonus-point win over Edinburgh at the RDS on Saturday night.

Dan Leavy also did not return after suffering the effects of a forearm into the face from Pierre Schoeman, which resulted in the Edinburgh replacement loosehead being red-carded and left Leavy requiring an HIA.

“The two of them will go through the return to play [protocols] now. Obviously James was removed by our medics and then Dan had the knock at the end and we’ll get the report at the end of the week.”

The Ryan and Leavy head knocks aside, it was a fruitful night for Cullen and Leinster, as the reigning Guinness Pro 14 champions completed a second bonus-point win in two games at the RDS.

“With Edinburgh it was very, very competitive against them in the Conference so it was great to get a win and a bonus point as well is very, very pleasing,” said Cullen. “I thought the guys showed good intent throughout the course of the game.”

“We were close to getting over a couple of times in the first 10 minutes but couldn’t quite get over. Eventually we did get over and then defended on our try line for a big period midway through the first half, and then got in just before half-time.”

“Edinburgh stuck at it pretty well but then after that [Edinburgh try] I thought we controlled the game pretty well. Our guys showed good patience to stay at it and get a couple of tries, and then the one at the end was pleasing. It was nice just to shut them out.”

Among the many home payers who caught the eye was Jordan Larmour, who revelled in the freer role afforded him at fullback having starred on the wing a week previously.

Cullen remained non-committal as to the youngster’s best position.

“I think he has that versatility. Jordan could play anywhere, so he could, so I think he’ll play at fullback and on the wing quite a bit for us. With Ireland he was playing that number 23 role quite a bit last year, and even in that Grand Slam game against England he came on pretty early at centre. That versatility is a great strength of his. He gets a lot of space at 15 but he’s also dangerous on the wing.”

Looking ahead to their meeting with Connacht at the Sportsground next Saturday, Cullen said: “Next week again is a different challenge. A good physical contest, it’s late so we’ll now try and get the lads rested up so we can try and prepare properly for the week and challenge which is ahead. “