Munster's away form putting pressure on them at home

'The old cliche is that defence wins trophies, but it’s not a cliche. It’s 100% the fact of the matter’ 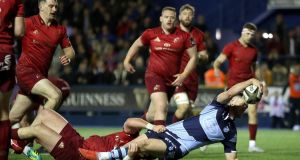 If his first half season at the helm, which culminated in two away semi-final defeats, taught Johann van Graan anything it was, he said at the outset of this one, the need to secure home advantage in the knockout stages.

The problem, however, is that Munster’s away form throughout the season was the primary reason they were condemned to away semi-finals, and there are already signs that history could be repeating itself.

Granted, they probably faced Cardiff on their all-weather Arms Park surface on the worst weekend possible last Friday given the Blues were coming off three defeats out of three games, culminating in back-to-back defeats in Italy where the previous week they had surrendered a 21-0 lead after just 11 minutes against Zebre. Under new coach John Mulvihill, their season was almost on the line already. Certainly their pride was.

Even so, and as forwards coach Jerry Flannery has since admitted, Munster’s performance was “not good enough”.

As a result, whereas they have racked up a dozen tries to one in 38-0 and 49-13 wins at home to the Cheetahs and the Ospreys, Munster have scored two and conceded seven in 25-10 and 37-13 losses away to Glasgow and Cardiff.

Given all the gloomy forecasts prior to the changeover in head coach midway through that campaign, it was all the more commendable

There have been other factors at work aside from the venues, not least Glasgow and Cardiff being locked and fully loaded, whereas the Ospreys were keeping their powder dry for home games. It’s also early days, but there’s a slightly alarming pattern here which Munster need to arrest.

Verdicts and opinion vary on their campaign last season, although at face value reaching semi-finals in both competitions is a creditable performance. Had it not been for the surprising non-show for the first half hour or so in Bordeaux against Racing 92, a team they had beaten three times out of four over the last two seasons, that might have been a more commonplace view too.

Given all the gloomy forecasts prior to the changeover in head coach midway through that campaign, it was all the more commendable. Furthermore, Leinster only beat them by a point in the Pro14 semi-final at the RDS.

In the preceding campaign of 2016-17 which, of course, featured even more upheaval and true tragedy with the passing of Anthony Foley, Munster were consistent enough to earn home knockout ties all the way. Ultimately, though, they were beaten emphatically in both a “home” European Champions Cup semi-final against Saracens at the Aviva Stadium, and a Pro12 final defeat at the same venue to the Scarlets.

Yet dig a little deeper and results were not quite as good last season.

The underlining cause of this was the decline in Munster’s away form. Two seasons ago not only was their home form excellent (winning 16 out of 18 if one excludes the aforementioned two Aviva games), but so too was their away form. In 13 matches Munster won 11 and lost only two – against Leinster, again at the Aviva, and Leicester.

This can be primarily attributable to their away form in the Guinness Pro14’s regular season, where nine wins and one defeat in 10 games two seasons ago became four wins and six defeats last season. That’s quite a turnaround, and would be easier to dismiss were it not for the opening four rounds this season.

“We can’t just put it down to one area,” said Flannery with regard to last week’s performance. “From my responsibility our set-piece didn’t function like it should have. Defensively, obviously, we bled tries that were first phase which were really disappointing to concede, and then in terms of our attack we didn’t convert when we got into their 22, so there’s a lot of things that we’ve got to work on that weren’t good enough.”

After Joey Carbery’s two try-scoring assists in the first half, Munster didn’t register a point in the second. The turning point, as Van Graan admitted, was Munster’s attacking scrum underneath the posts nearing the hour when still in the game at 24-13 down.

Carbery and JJ Hanrahan lined up directly behind the scrum, with Carbery gliding to the left and feeding Rory Scannell. He trucked it up, and there followed 11 pick-and-jam or one-off rumbles by the forwards, with Carbery not touching the ball again before referee Quinton Immelman penalised Munster for not releasing.

It was a dreadful decision as Kristian Dacey clearly hadn’t released after the tackle and wasn’t supporting his own body weight. But as former player Donnacha O’Callaghan admitted on Eir Sport afterwards, they’re the ones that tend to go against away teams and ultimately Munster weren’t good enough.

But although they failed to score in the second half, the most worrying aspect of Munster’s performance in Cardiff was assuredly their defence.

Over the last two seasons Munster’s attacking record was almost identical – 106 tries in 32 games overall two seasons ago, and 105 in 31 games last season. But their defence conceded eight tries more in the Pro14 last season, and thus over the course of the campaign as well – 56 as against 48.

Last week Cardiff went through Munster’s thin red line for all four of their tries, and all told made a dozen line breaks to Munster’s five. What grated with Munster, as admitted by Flannery, was that the first two tries were both the result of clean first-phase line breaks, each off line-outs, by Cardiff centre Willis Halaholo.

For the first he stepped inside Chris Cloete and muscled through Mike Sherry, normally a very good tackler, before Nick Williams scored off the close-range recycle. For the second he goose-stepped Cloete before giving the try-scoring pass inside to Tomos Williams. Allowing for Halaholo’s footwork, that just shouldn’t happen.

Munster’s defence coach JP Ferreira joined Munster shortly after van Graan midway through last season having helped the Lions to a Currie Cup Championship in 2015 and consecutive Super Rugby finals in the last two years. Indeed, the Lions conceded the least tries (27) and points (322) of any team in the 15 rounds of the competition last year.

Bernard Jackman said: “He’s really highly thought of, apparently a very good technical coach and quite young, but builds a quick rapport with players. This guy is a real good operator, and any of the top clubs in Europe would be happy to be able to bring this guy in.”

Furthermore, according to Van Graan, Ferreira’s defensive systems are similar to those under Jacques Nienaber.

“We haven’t changed a lot of things defensively. The first thing is that your attitude needs to be right. We’ve got several things that we pride ourselves on in Munster and we weren’t good enough, and we as leaders will take responsibility and accountability for that.

“Sometimes you’ve just got to tackle the guy in front of you. It’s not about our system. If a guy’s in front of you then you’ve got to hit him. We didn’t do that last Friday night, and it wasn’t good enough.”

Munster missed 20 tackles in all, and they were liberally spread throughout the team. “It’s too high,” admitted Peter O’Mahony, who like van Graan maintains their away form is not a concern so much as their need for greater consistency.

“The old cliche is that defence wins trophies, but it’s not a cliche. It’s 100 per cent the fact of the matter. If you look at the teams that have won any competition over the last 20 years, they’ve had a good defensive record.

The impression is that Munster have been angry with themselves this week is not dispelled by their captain.

“Yea, it’s something you have to have huge pride in, and when a player walks through our defence twice without being touched, of course you’ve got to hurt from that. It’s difficult to get momentum these days, never mind a clean break.

“Guys know themselves that it needs to be better. There’s no one harder on the players than us ourselves, and guys would be beating themselves up during the week but you’ve got to scratch that now and you’ve got to implement your lessons into the following week.

“If you’re feeling sorry for yourself for too long in this game all you’ll get is another beating and another beating after that, and it’s hard to get out of it. So you have to get back on the horse.”

Like Van Graan, O’Mahony maintains their away form is not a concern, more their need for greater consistency. One can understand why they wouldn’t want to make an issue out of it as then it might become a bigger issue. But Munster’s need for a victory is even more acute in light of those away defeats to Glasgow and the Blues, and as the next fortnight brings somewhat daunting assignments against Leinster and the high-flying Exeter Chiefs in their Heineken Cup opener.

Their away form may not seem particularly relevant today given Munster are back in their Thomond Park citadel, although of course it is their away form which is putting added pressure on them to maintain a flawless home record.

Munster’s home and away record since the start of last season.