Johnny Watterson at the RDS 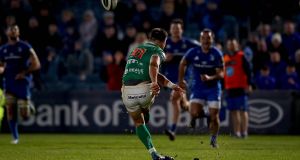 Benetton’s Tommaso Allan kicks a late conversion to tie the Pro14 game with Leinster at the RDS. Photograph: Ryan Byrne/Inpho

After the match Leinster coach Leo Cullen hinted that his side’s Pro 14 performance against a physical Benetton side should be qualified. The qualification was that this was an inexperienced squad up against a pack of Italian international players replete with Six Nations’ scars and attitude.

The coach was somewhat right. But Leinster had an international front row in Jack McGrath, James Tracy and Andrew Porter with an experienced secondrow in Mick Kearney and Scott Fardy. Scrumhalf Luke McGrath has eight caps and winger Fergus McFadden 34. That’s almost half the team.

Still, Cullen’s point was well made and as Leinster lost their lineout organiser Mick Kearney and outhalf Noel Reid to an HIA, the organisational framework that the home side began with quickly softened. That supervisory influence never emerged.

It was for a long time a catch up game with Leinster often close to having a more comfortable night. But their inability to control territory, physicality and possession ensured it became a ding-dong game of tit for tat rugby.

Breaking the cadence, Leinster then scored the nicest try of the night with McGrath transferring to Conor O’Brien and the sweetest of no look passes put Ciarán Frawley through for a seven-point lead with 71 minutes gone.

Leinster had the lead and smell of victory for the first time. The match was theirs and then it wasn’t. For that it took an almost absurd finish.

On 80 minutes right wing Ratuva Tavuyara set about causing what Cullen subsequently described as chaos. It wasn’t a bad choice of word as the Italians set about demanding their pound of flesh because they believed they deserved it.

In the second last play of a still, cold evening the Fijian’s dancing feet left Hugh O’Sullivan, Barry Daly and James Lowe grasping at shirt fibres as he cut back and sailed through the heaviest of traffic on 80 minutes with Tommaso Allan converting for 27-27, a deserving end for the Italians who were adamant that they left much more than a draw behind them in the RDS.

What Cullen can take from it remains to be seen. Flanker Max Deegan, who was a forced positional change to blindside when Josh Murphy withdrew late on with tonsillitis, had another eye-catching game and won man of the match.

Luke McGrath also got 75 minutes more game time in his legs, which is a positive advancement for the European Champions Cup semi-final against Toulouse in a few weeks time.

“I thought it was a really good test for our guys because there’s a lot of experience not playing. You lose your lineout caller and your 10 in the first half, then you are trying to move guys around,” said Cullen.

“It’s tricky. I’m really happy. At 27-20 to come from where they came from . . . disappointment at the end where we don’t quite deal with some of the bits that are going on there. It’s a positive experience.

“All the players that we’ve used, 55 during the course of the campaign to get us a home semi final means we can manage the group well and means you are all the time trying to conserve energy for the biggest games. A lot of guys not playing, a lot of guys who will come into the mix next week.”

It was, as Cullen pointed out, a match in which both teams went through long phases of recycling. To add to the physical nature of the game, that aspect determined the breakdown to be a real contest. No player back or forward was spared with Scott Penny, Deegan, Caelan Doris and replacement Jack Dunne all forced into making 25 plus tackles.

“You are seeing these high phased games, 25, 30 phases on a pretty regular basis now,” said the coach. “That’s the way the game is being refereed now. It was 39, 40 phases in our last sequence against Ulster last week so teams are getting good at recycling the ball and the way the breakdown is being refereed it is slightly easier to retain possession.”

From here on it could be a rough few weeks with some of the players who faced Benetton expecting to go again.

“Glasgow next week. Themselves and Munster are trying to finish on top of that conference [‘A’],” said Cullen.

“Glasgow, they’ve a lot of tread, a lot of pace and they also have this brutality side to their game which means there are always lots of bits going on around the ruck. Obviously Toulouse the week after.”

Cullen didn’t say it. But all of Benetton last weekend, all of Glasgow next weekend is for just that, Toulouse at the Aviva in a few weeks’ time.