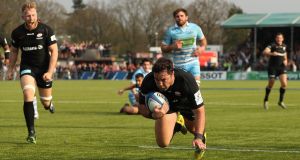 David Strettle capitalised on the late withdrawal of Owen Farrell to cross twice as Saracens set up a Heineken Champions Cup semi-final against Munster with a 56-27 victory over Glasgow.

Farrell pulled out of the team after his wife went into labour on Saturday morning and in the England captain’s absence seven tries were amassed against the outclassed Warriors.

Alex Goode provided a slick alternative at flyhalf and the contingency plan also promoted Strettle from the bench to the left wing, allowing the veteran to help himself to a touch down in each half.

Wales fullback Liam Williams also ran in two tries, while hooker Jamie George and centre Brad Barritt were outstanding throughout – the former even operating as an occasional playmaker to be acclaimed man of the match.

The Allianz Park clash was the third time the rivals have met this season and this was the most emphatic of Saracens’ three wins as Glasgow were swept aside to set-up a last four appointment with Johann van Graan’s side at the Ricoh Arena in three weeks’ time.

Maro Itoje made a barnstorming comeback from the knee injury sustained in England’s Six Nations opener against Ireland, but the favourites suffered the sickening blow of seeing Barritt carried from the field on a stretcher in the final minute because of an injury sustained to his left ankle.

Another player making his return after seven weeks out with a shoulder injury was Stuart Hogg but even his pace and ingenuity could not prevent a landslide defeat.

Hogg was involved as Glasgow made a blistering start, drawing two defenders in a set-piece move that was given urgency by the speed of Rory Hughes and ended with Ali Price touching down after just 69 seconds.

Saracens pressure led to the score being levelled as first Sean Maitland’s persistence forced a penalty and when Goode lofted a kick over the posts where Williams outjumped Adam Hastings to catch and score.

Alex Lozowski landed three points to put the English champions in front for the first time and they were now the dominant force, winning the aerial battle and the collisions, but on two occasions visits deep into enemy territory were ended by soft penalties.

Glasgow eventually cracked for a second time as they struggled to contain waves of attacks, Will Skelton and Itoje making dents through their power and Barritt carrying hard before George sent Strettle racing over.

Barritt was having a stormer as he punched another hole in midfield, Billy Vunipola followed suit and when the move swept left with George acting as playmaker, Barritt was able to run in his side’s third try.

Successive long-range penalties by Hastings kept Glasgow in the hunt but one of those was wiped out by Lozowski shortly after half-time and Saracens resumed pounding away in the visiting 22.

A patient build-up came to a head when Vunipola offloaded in the tackle and George took Goode’s pass to tie in defenders by the touchline before Williams arrived on an incisive line to plunder his second.

Another Lozowski penalty left Glasgow floundering and when Strettle picked off a dismal pass by Stafford McDowall to score under the posts the floodgates were open.

George was driven over from a short range lineout for Saracens’ sixth try but the Warriors were back on the scoresheet when an injection of pace by Hogg created a touch down for George Horne.

Nick Tompkins crossed to restore the previous order of home dominance but Glasgow had the final say in overtime after Matt Fagerson drove over a forwards try.