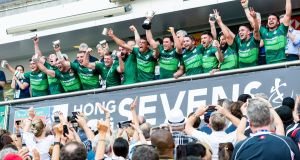 Ireland will be one of the 20 core teams in next year’s HSBC World Rugby Sevens Series after silencing the home crowd at the Hong Kong Sevens to book a spot at the top table.

In front of a partisan, capacity crowd at the Hong Kong Stadium, Ireland put last year’s disappointment of losing to Japan in the semi-finals to bed, with an assured performance against the tournament hosts.

Harry McNulty dived over the line after three minutes thanks to a deft offload from Jordan Conroy. Captain Billy Dardis, who had missed day one of the tournament due to a stomach bug, converted to put Ireland into the lead.

Greg O’Shea, whose grandfather emigrated to Limerick from Hong Kong in the early 1950s, was next to dot-down, out-muscling the covering defence to stretch out for the whitewash. Dardis again converted to put Ireland into a 14-0 lead at the break.

Conroy crossed for his 10th try of the weekend at the start of the second half, the Tullamore flyer awarded player of the tournament thanks to his tally across the six games. Dardis again added the extras.

Tom McQueen got a try back for Hong Kong and despite losing O’Shea to a yellow card, Ireland finished with a fourth try from Terry Kennedy to seal victory and a golden ticket to the top tier ahead of Olympic qualifiers later this year.

Earlier in the day, with high humidity at pitch-level, Ireland met European rivals Germany in the semi-finals.

Both sides went hard at it in the opening stages, and it took until the closing seconds of the first for Ireland to register the first points of the game. Germany conceded a penalty on their own five-metre line, and a well-worked move saw Conroy cross for his first of two tries in the game, sending Ireland into the break with a 5-0 lead.

Germany hit back almost immediately from the restart. They won a penalty at the ruck and from a tap-play, found a gap in the Irish defence to cross the line. The conversion was missed, making it 5-5.

The Germans competed hard at the breakdown and scored their second try from a turnover ball to give them the lead.

Ireland were then again guilty of infringing at the breakdown and conceded a penalty in front of the posts. Germany opted for a shot at goal, but the drop-kick was scuffed to the left of the posts.

From the 22 drop-out, Ireland gathered well and gained some momentum, working the ball upfield.

Some neat interplay between McNulty, O’Shea and Kennedy put Dardis into space and the Kildare man raced through to touch down for a converted try.

As the clock ticked down, Ireland looked to have done enough, but Conroy ensured a place in the final with a well-taken score in the corner which Dardis expertly converted to give his side a 19-10 victory.

Stuart Lancaster knows Leinster’s strength in depth will be key in busy schedule 05:30
Corofin’s quality won’t have chance to shine on biggest stage 05:00
Heroic insanity: When Michael Dunlop raced home in memory of his father 05:00
Gerry Thornley: Consistent trailblazers New Zealand once again ahead of the posse 01:00
Manchester United huff and puff their way into semi-finals 22:51
Crossword Get access to over 6,000 interactive crosswords