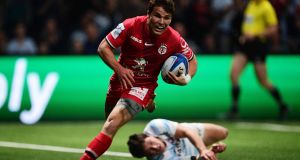 Antoine Dupont scores a try for Toulouse during their win over Racing 92. Photograph: Martin Bureau/AFP/Getty

Leinster will play Toulouse at the Aviva Stadium in the semi-finals of the Champions Cup, after the French side beat Top 14 rivals Racing 92 22-21 at the La Défense Arena on Sunday.

Four-time winners Toulouse defied Zack Holmes’ first half red card to land a stunning victory, and set up another clash with Leinster, who they faced during the pool stages.

That fixture will take place on Sunday April 21st, at the Aviva (kick-off 3.15pm). It will be broadcast free-to-air on Virgin Media One and on Channel 4.

Meanwhile in the competition’s other semi-final Munster will travel to play Saracens at Coventry’s Ricoh Arena. That fixture kicks-off at 3.15pm on Saturday April 20th.

Johann van Graan’s side progressed to the last four thanks to a narrow 17-13 win over Edinburgh at Murrayfield. They face a daunting assignment in the semis against a Saracens side who thrashed Glasgow Warriors 56-27 in the last eight.

The Heineken Champions Cup final will be held on May 12th at Newcastle United’s St James’ Park.