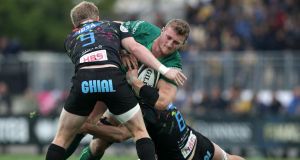 A hard-earned one-point win over Zebre was sufficient, if not inspiring, for Connacht to maintain their primary seasonal aim of a Pro 14 quarter-final and Champions Cup qualification.

Andy Friend’s side were lucky that the Italian side missed three kicks at goal as Connacht struggled to convert their positional and territorial dominance against a physical outfit, but to come out with the four points was the primary aim achieved.

It ensured that they edged ahead of fellow Conference A quarter-final rivals Cardiff, who travel to Galway for a showdown on Saturday. But coming on the back of Connacht’s exit from Europe, it is doubtful if Saturday’s unconvincing performance at Stadio Sergio Lanfranchi will have the Welsh outfit unduly worried.

That Connacht failed to convert superior territorial control ensured Zebre never put down tools in the second half, and Friend saw more merit than negatives in Connacht’s display.

“One point is all we needed,” he said. “We came here to get the win and we did, and I am really pleased – really proud of the boys.”

With a solid set piece and 63 per cent territorial control in the opening 40 minutes, Connacht came up against a well-drilled defensive Italian outfit that frustrated Connacht’s attacking plan. After outhalf Jack Carty posted two penalties within the opening 20 minutes, thanks to a dominant scrum, Zebre stymied Connacht’s lack of quick supply, a complex officiating area for referee Ben Blain, who made his Pro 14 debut in January.

“I was getting frustrated with the speed of our ball,” said Friend, “but if you are not allowed to play quickly because tacklers aren’t removed, then it becomes a really frustrating game and that is what we saw.

“I thought some of our decision making [was good] – to turn them because we couldn’t break the wall down, and fair play to Zebre too. They played with a lot of pride in front of their home fans there, and they were tough, really tough, which is why we have lost there for the last couple of years. But we are a different team and we edged out the win.

“Connacht haven’t won here in two years, and there is a reason. It was not a poor performance. It may look like it and we didn’t score any tries, I get that. Again for me we had five penalties in 10 minutes, 10 metres out, but not one card.

“Give me a break, that’s not footy. When that happens, you can only mount pressure for so long, and when you don’t get reward from that, the opposition gets their tails up and off they go. So for me it was extremely frustrating, but we still kept our composure and got the win.”

Not the happiest hunting grounds in recent seasons, the Irish side was heading for another defeat when Zebre had three opportunities to put themselves in front. But in the end Zebre coach Michael Bradley’s frustration matched Friend’s when his side missed three kicks at goal – a conversion and two penalties.

Zebre improved in the second half, having bagged the game’s only try from Mattia Bellini within two minutes – Edoardo Padovani missing the conversion and a subsequent penalty, while replacement Guglielmo Palazanni missed a last-minute kick. At the other end Darragh Leader’s try was overturned for a forward pass in the build-up, another decision that proved costly.

“We put their set piece under a lot of pressure,” said Friend. “We turned over some ball, crossed the line only to have it called back, was it a forward pass? Was it clear and obvious forward pass? No. But these are the decisions that go against you, but we didn’t lose focus and hung on in there for what was a really gutsy win, so we came here and achieved what we wanted, to win. Cardiff next week, so bring it on.”