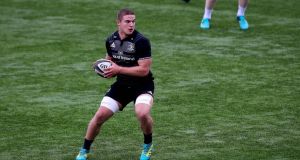 Scott Penny: “He’s one of a number of players that will be potentially given opportunities over the next few weeks to put their hand up,” says Leinster scrum coach, John Fogarty. Photograph: Ryan Byrne/Inpho

And so it was left to John Fogarty two days after Leinster qualified for their European semi-final and shipped a bit of a bruising.

Josh van der Flier has gone, Dan Leavy has gone and Joe Schmidt believes Sean O’Brien is struggling with his conditioning and sent him back to Leinster.

Not so long past Leinster had too many backrow players. Now claims are that they have too few, or, maybe too few sevens. Fogarty doesn’t think so. Not too few of anything. And sevens? Look around.

“‘I can’t really select the team for a semi-final just yet, they’re all the mix,” says Leinster’s scrum coach.

“Will Connors has just come back from a long-term injury. It’s great to see him come back this week to train and he’s another guy that’s a seven. Max [Deegan], Caelan [Doris] and Scott [Penny], these are all guys that have gone well at different stages.”

Penny’s rise has been steep and impressive. Still just 19-years-old, the former St Michael’s student made his Leinster debut last November having posted Leo Cullen a postcard from the Celtic Cup campaign where he made some noise scoring eight tries across seven games.

Unusual for a forward, the tally included a hat-trick against the Ospreys development team. Of course he was man-of-the-match.

Preferring to play on the open side, the teenager is not holding his age up as a barrier to remain in the shadows until he gets older. Nor is Fogarty.

‘He’s only a pup,” quips the Leinster coach. “I remember we were sitting here and talking about Scott. He’s slotted in seamlessly and the part that he’s slotted in best was with his mindset. He wasn’t that fazed.

“We’ve picked young players before and you could see visibly in the warm-up that they’re absolutely shattered because they’ve worried and stressed about what’s going to happen.

“He’s someone that’s come off a Grand Slam-winning 20s team. He’s played a number of games for us. I’m not saying that he’s going to be slotted straight into seven, I’m not saying that at all. What I’m saying is he’s one of a number of players that will be potentially given opportunities over the next few weeks to put their hand up. We don’t worry about Scott, he’s physically very good. He’s a good player.”

It has been part of Leinster’s success that they have nurtured players. But on last week’s evidence, the team is struggling to hit their best numbers.

The fall off has not been as dramatic as the Irish team. It has gotten Leinster two games away from back to back championships. For Fogarty though, it’s getting the mix right, putting the right players in the right places on the pitch. There is some re-thinking going on.

“You’re constantly dealing with things all the time,” he explains. “We’re not going to select on what has happened in the past. We’re going to look to see who’s being going quite well in training sessions and in games. There will be opportunities and we have to make sure we are selecting the right players.

“It’s not straightforward,” adds the former hooker, who played in Munster, Connacht and Leinster.

“And we won’t make it as straightforward as saying ‘this guy has 100 caps for Ireland, he is going to be starting there. This guy has played none so he doesn’t get in’. It will be interesting times. We’re delighted to have a home semi-final.”