RWC 2019: natural disaster could be a real threat in Japan 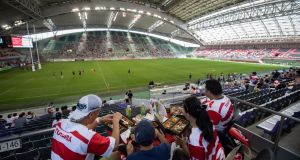 With exactly a year to go to the 2019 Rugby World Cup in Japan the organisers are unusually bullish. For the first time rugby’s premier tournament is heading for Asia, with all the gospel-spreading potential that involves. There is talk of the event being the most economically impactful in the sport’s history and the knock-out stages, in particular, could be truly spectacular. “We’re confident that Asia’s first World Cup will be very special and successful,” says Brett Gosper, World Rugby’s chief executive.

There is just one niggling unknown for administrators, tourism officials, coaches and fans alike: the weather. September, when the tournament kicks off, is one of the peak months for chaotic conditions in Japan, with an average of three major tropical cyclones per year hitting the country’s main islands. This month the biggest storm for 25 years struck Kobe (where Ireland will play Russia) and Osaka, both of which will be hosting World Cup games, leaving a trail of death and significant travel disruption in its wake.

Conditions were so extreme that, had it been 12 months later, neither of the team camps allocated to Italy or the USA in Osaka would have been available for use.

Such relative inconveniences clearly need to be kept in perspective but given Japan also experiences more than 1,500 earthquakes a year on average, there is unusual scope for disruption even for the most organised squads. On 6 September a magnitude 6.7 earthquake struck the northern island of Hokkaido and the city of Sapporo, where England will be based for their opening match, killing up to 40 people and leaving millions without power.

The tournament’s director, Alan Gilpin, accepts it is “a real hot topic for us”, acknowledging a similar pattern of events in 12 months’ time would severely complicate matters. “Teams like Australia and England would have been arriving in Sapporo in that time frame. So, yes, we are planning right through from what happens if a team hotel is lost, what happens if a training venue is lost, through to what happens if one or more match venues are lost. Where do you relocate matches to, what are the time frames, how does that affect transport, planning, moving teams around? We are working through all those scenarios.”

The upside, Gilpin argues, is that the host nation is accustomed to such crisis management. “Japan copes very well with the adverse weather and other environmental issues they have. Their venues and hotels are built to withstand incredibly adverse conditions, so in some respects they are less affected. What you tend to see in Japan is older buildings and structures being affected when they have either earthquakes or typhoons but we obviously have to take that seriously.

“I think the teams are all aware of the territory we’re dealing with. They’re very aware of the need to have contingency plans in place.”

Mix in the sizable insurance implications or the possibility of a sudden complete broadcasting blackout on the eve of a major game and it is abundantly clear why this ranks as the most challenging World Cup operationally in Gilpin’s experience.

Culturally, too, it will be significantly different, not least for players with multiple tattoos. In Japan these are associated with the country’s mafia equivalent, the Yakuza, and squads have already been requested to show respect in public areas such as swimming pools or gyms by wearing rash vests.

“We have done a lot in the last year or so with the teams to get them to understand that,” Gilpin adds. “When we raised it a year or so ago we were probably expecting frustrated reaction from teams, and there hasn’t been at all. We won’t force any teams to cover up, but they want to because they want to be seen to be respecting the Japanese culture.” Changing footwear when entering or leaving a building will also be quietly encouraged.

England, either way, will have one unique local advantage: Eddie Jones is among Japan’s most celebrated rugby figures, having steered the Brave Blossoms to their incredible RWC pool win over South Africa in Brighton in 2015. Jones’s return may well also increase the number of neutrals keen to buy into the tournament, regardless of how Japan perform this time round. “People who know nothing about rugby in Japan know all about the All Blacks and Eddie Jones,” says Gosper.

There is also a sizable local desire to get things right, with the Olympics also bound for Tokyo in 2020. A big-event culture exists in Japan and there were 2.5 million preliminary ticket applications for 1.8 million seats. The general ticket ballot opens on Wednesday and some 400,000 international visitors are confidently expected to check out the land of the rising scrum for themselves.

Newcomers will be best advised to park their preconceptions, invest in a good phrasebook and strap themselves in for an unmissable bullet train of a ride all the way to the final in Yokohama on November 2nd 2019. “Ground-breaking is not a phrase they like to use out there but it will be a special World Cup,” added Gosper. All that remains is for the weather gods to play ball.

1 Keith Duggan: Through the glories and the disgraces, we were all Maradona addicts
2 Rugby Stats: Blame game at lineout time is on the whole team
3 GAA Statistics: Can Cavan and Thomas Galligan beat Dublin with the long kickout?
4 Andy Farrell to delve deeper into Irish squad for team to play Georgia
5 All bets are on as America opens the gambling sluice gates and the dollars flow
Real news has value SUBSCRIBE