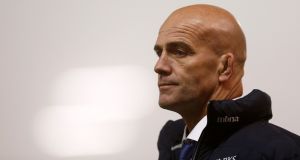 John Mitchell: “This is an exciting opportunity to work with England Rugby and support Eddie Jones as head coach.” Photograph: Reuters

England have appointed John Mitchell as their defence coach until the end of next year’s World Cup.

Mitchell has been recruited from his role at Super Rugby team the Bulls and starts work this month ahead of the autumn series against South Africa, New Zealand, Japan and Australia.

The former All Blacks head coach fills the position vacated by Paul Gustard, who left Eddie Jones’ management team to become Harlequins boss after the June series against the Springboks.

A fee in the region of £200,000 (€225,000) has been paid to the Bulls as compensation and in a further development, Scott Wisemantel will be retained as attack coach for a critical series at Twickenham.

“Defence is a key pillar of our game and John is an experienced coach,” Jones said. “He’s coached the All Blacks, USA Rugby and a number of Super Rugby sides so he will bring a wealth of experience and add to the coaching mix we have here.”

It is the second time Mitchell has served as England assistant coach having worked under Clive Woodward for 33 Tests from 1997 to 2000.

The well travelled 54-year-old, who has also worked in the English Premiership at Wasps and Sale, took the All Blacks job in 2001 to oversee a run of 23 wins from 28 Tests that ended after a semi-final exit from the 2003 World Cup.

“This is an exciting opportunity to work with England Rugby and support Eddie Jones as head coach,” said Mitchell, whose extensive CV includes a spell in charge of the USA Eagles.

“I will be joining an elite high-performance programme, Test team and coaching group where I will use all my experience and focus to bring the necessary clarity and confidence to the players from a defensive perspective.”

Wisemantel’s appointment for the summer tour to South Africa was deemed a success due to England’s attacking play in the first two Tests, although both games ended in defeat.

The 48-year-old Australian, who was recently backs coach for Top 14 club Montpellier, was involved in the 2011 and 2015 World Cups with Samoa and Japan respectively.