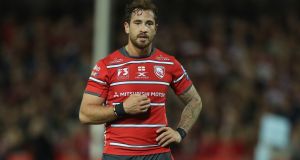 Danny Cipriani has been left out of a 36-man England training squad by Eddie Jones. Photograph: David Rogers/Getty

Danny Cipriani has been left out of the first England training squad since his two convictions for common assault and resisting arrest. Cipriani has since made a flying start to the season with Gloucester but he is the eye-catching omission from Eddie Jones’s 36-man squad which includes Manu Tuilagi and the suspended Chris Ashton.

Cipriani is England’s incumbent fly-half, having made a first start in a decade against South Africa in June, but in August he was arrested following a nightclub incident during Gloucester’s pre-season tour of Jersey. He was fined a total of £4,000 and found guilty by the Rugby Football Union of “conduct prejudicial to the interest of the game”.

Jones does not name his squad for England’s autumn internationals until October 18th – this is a three-day training camp in Bristol where the players will, among other things get accustomed to their new defence coach, John Mitchell – but while Cipriani’s hopes of retaining his place are not over, his omission would suggest his chances are damaged.

Tuilagi meanwhile, is rewarded for showing some semblance of early-season form – he has started all three of Leicester’s matches and scored a fine try against Newcastle – and is included by Jones for the first time since he was sent home in disgrace after a late-night drinking session last August. He has not played for England since a replacement appearance against Wales during the 2016 Six Nations and not started since the summer of 2014 but Jones’s decision to cast his eye over him makes obvious sense with exactly 12 months to go until the World Cup.

Ashton’s selection is not surprising in that Jones had hinted at including him a couple of weeks ago but he is currently in the middle of a seven-week selection for a tip tackle during pre-season and will not have played a competitive match at all this season before Jones names his autumn squad. He was included in Jones’s August training squad however, in what constituted an immediate recall following his summer move from Toulon to Sale.

“The training camp in Bristol is our last opportunity to get the squad together before the [AUTUMN]internationals so it is vital we put down some parameters, particularly with John Mitchell coming in as defence coach,” said Jones. “We’ll implement a slightly different defence philosophy building on the great work Paul Gustard has done to keep advancing our defence. It’s a great opportunity for the players to work with John and for the team to keep evolving.”

1 Colin Byrne: Hard to understand how golf has become the bogey man now
2 Irish duo set for AFL Grand Final as sport lifts the gloom Down Under
3 Barbarians match in doubt after 12 players go on unauthorised night out
4 Jackie Tyrrell: Winter is here and a machine-gun Championship awaits
5 Fresh faces and renewed appetite: Is this a new era for Irish rugby?
Real news has value SUBSCRIBE