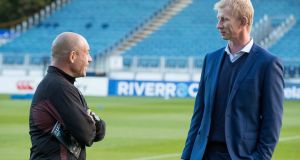 Leo Cullen, the player, worked under Richard Cockerill at the Leicester Tigers from 2005-2007, so he’s well versed with the Englishman’s methods as a coach, down to the physically abrasive way he likes his team to play and the emphasis on excellence in the set piece and at the breakdown.

Knowing what to expect and countering it is the expanse in performance terms that Cullen’s Leinster will have to bridge at the RDS. Last season Edinburgh posed a bagful of problems for the Irish province and honours were shared, the home team winning on each occasion.

Cullen admitted: “They are a very physical team, very direct, very confrontational. The Leicester team that I was part of; that was part of the DNA as well. But, they have plenty of creativity in their play. I think Duncan Hodge is an excellent attack coach.

“He [Cockerill] is strong in the fundamentals and the physical confrontation part of the game. It is a bigger front five than they had last week, say; Ross Ford is bigger than [Stuart] McInally, [Simon] Berghan is bigger than [WP] Nel, [Fraser] McKenzie and [Ben] Toolis are probably their biggest secondrows as well.”

Edinburgh show nine changes from last week, the suspicion is that the adverse weather projected for Saturday night in Dublin and the type of game that may materialise as a result may have informed Cockerill’s selection process as much as squad rotation and a decision to rest a handful of Scottish internationals.

Cullen has opted to shuffle his resources from last week’s victory over the Dragons. Jordan Larmour switches to fullback, there are two new wings in Fergus McFadden and James Lowe, Luke McGrath is reinstated at scrumhalf, the frontrow is changed en bloc, while Devin Toner is the only alteration to the back five in the pack.

Dan Leavy has recovered from a sternum injury and is in line to play his first match of the season when introduced from the bench in a match in which Leinster captain Jonathan Sexton will make his 150th appearance for the province.

There was also a reasonably positive update on Sean O’Brien’s potential return date. Cullen said: “Sean is making steady progress. He did a good bit of rugby training this week, so we’ll just see how he gets through the start of the next week and we’ll make some calls based off that.”

The lineout and breakdown are facets of the game that required polishing from last week, but to beat Edinburgh the starting point is matching their physical intensity and in doing so establishing a platform from which to launch the latent quality of the Leinster backline.

1 Golf clubs waiting to hear if they can stay open under Level 5
2 Wijnaldum attacks ‘stupid’ Pickford tackle on van Dijk
3 Donegal preparing for marathon solo journeys to Tralee
4 Gerry Thornley: After 32 weeks the Six Nations is back up for grabs
5 Dan Martin stakes podium claim on opening stage of Vuelta
Real news has value SUBSCRIBE

Kelly and Lynch ready for Thurles showdown as if it’s their last 20:50
Wijnaldum attacks ‘stupid’ Pickford tackle on van Dijk 20:10
Golf clubs waiting to hear if they can stay open under Level 5 18:55
Donegal preparing for marathon solo journeys to Tralee 18:47
Dan Martin stakes podium claim on opening stage of Vuelta 18:24
Here is your handy guide to sport on television this week