Leinster cut loose in second half against limited Dragons 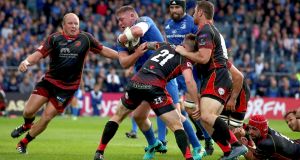 Leinster prop Tadhg Furlong on his way to scoring a try despite the tackle from Tavis Knoyle of the Dragons at the RDS on Saturday. Photograph: Dan Sheridan/Inpho

The net benefits will outweigh any performance concerns, seven tries, no injuries and the reintroduction of a host of Irish internationals ensured a productive evening for Leinster on their first run-out at the RDS this season.

It might be wrong to describe the Dragons as ornery opposition because at no point in the contest did Leinster have issues with prising open chinks in the Welsh side’s defence; it was more a case initially of not capitalising on the line breaks.

The Dragons brought energy, were abrasive in contact at the breakdown and scrambled admirably in defence but they were limited in what they mustered when sporadically in possession.

Leinster’s dominance wasn’t reflected on the scoreboard in the first half an hour – they led 10-0 at that point – and it took a moment of madness from Dragons number eight Ross Moriarty just before the interval to provide the home side with an impetus that they grasped emphatically.

Moriarty received a yellow card for a late dunt on Leinster captain Johnny Sexton, an indiscretion that was silly and costly. Leinster head coach Leo Cullen summed it up perfectly when he observed: “When you drop your shoulder late into someone when he has passed that’s the risk you are going to run.”

Dragons coach Jackman had no issue with the referee’s call, pointing out that the player had afterwards apologised to his teammates.

In Moriarty’s absence, either side of the interval, Leinster accumulated 21 points, through tries from Josh van der Flier, Jamison Gibson-Park and Jordan Larmour, all improved upon by Sexton, who had earlier converted a try by Sean Cronin and kicked a penalty to boot. The only intangible remaining was the margin of victory for the home side.

Leinster’s rugby version of tiki-taka, employing hands rather than feet to move the ball smartly with short passing, was effective in collecting line breaks, the home side identifying that the Dragons were vulnerable to an inside pass and enjoying significant currency with this gambit.

The review process will reveal that Leinster might have scored another three first half tries if the decision-making had been informed with greater clarity and appreciation of supporting players. It was a relatively minor cavil when measured against the outcome.

Jack Conan has returned from the summer break in great nick and his footwork, along with that of James Ryan and Robbie Henshaw in particular was eye-catching and all three made significant progress in and around the gainline, invariably looking for and finding the trail runner. Andrew Porter was another to flourish while van der Flier’s work on both sides of the ball was exceptional.

Scott Fardy played with an intelligence and athleticism that yielded dividends for his teammates. The platform provided by the pack allowed Gibson-Park enough latitude to express his skills and he certainly boasts a broad range.

He scored two tries, running a nice line to take Ryan’s offload and a quarterback sneak from close range and also created one with a beautifully weighted kick that allowed Jordan Larmour to win a three-cornered footrace.

Sexton controlled the game with a polish that belied his first appearance of the season, while Garry Ringrose’s balanced running and game appreciation became more conspicuous as the game progressed. Lamour was effervescent.

A sign of a good team is the ability to recalibrate, a fact to which Cullen alluded in the aftermath. “We didn’t have that much structure to the game early on, we misfired on a couple of lineouts and the scrum was a little bit messy as well for both teams.

“It was a little bit disjointed. There is still a good bit for us to go, in particular how we managed parts of that first half. Credit the Dragons as well they were very abrasive in the first 30-minutes. It was a good challenge for us. We were disappointed with how last week went because mentally we felt we lapsed too often in the game.”

Dragons’ fullback Jordan Williams had the honour of scoring the game’s best try, a gorgeous slaloming run that took him past multiple defenders but the second half belonged to Leinster for the most part.

Gibson-Park’s basketball pass to replacement Tadhg Furlong allowed the prop to demonstrate his handling skills and then power as he barged over and the rout was complete when Fardy crossed with five minutes remaining; the Leinster bench ensuring momentum through to the final whistle.

Tougher days lie ahead starting next weekend, Cullen explained: “Edinburgh are a big challenge for us, we struggled in the two games we played against them last year. We had a tight win over here and a tight loss over there.

“Richard Cockerill (Edinburgh) is someone I know very well having being coached by him in Leicester for two years. He is someone who brings a lot of detail to the set piece and the contact area. It’ll be a tough challenge.”

Heavily-depleted France XV confirmed for Nations Cup final 13:45
Anthony Watson returns for England’s final with France 13:11
England and South Africa ODI off after positive Covid-19 test 12:53
Russell Knox takes an early lead after 65 in Mexico 08:06
Jackie Tyrell on corner-back evolution; Johnny Sexton back for Ireland 07:44
Here is your handy guide to sport on television this week