Kernohan gets first start in competitive match for Ulster 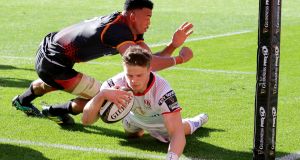 It has been an exceptional month for Angus Kernohan as the Ireland under-19 and U-20 international – he has also represented his country at Sevens – signed a contract to join the Ulster academy two weeks ago, having initially been passed over for a place in the summer, on foot of some impressive performances in pre-season friendly matches.

The 19-year-old Ballymena wing came on against Gloucester and scored a try against Wasps, thereby earning a place on the bench for Ulster’s opening Guinness Pro14 game against the Scarlets. He has fulfilled the same role in the team’s opening three matches in the tournament, and last weekend scored a try in the Irish province’s victory over the Southern Kings.

His footwork and pace make him a real handful, and have earned him a first start in a competitive match as Ulster complete the second of two matches in South Africa. He is selected on the left wing, with Wallaby international Henry Speight moving into centre alongside Stuart McCloskey, in what is probably the most robust midfield partnership that has ever donned an Ulster shirt.

Will Addison, fit again after illness forced him to withdraw prior to last week’s game, and Craig Gilroy complete a three quarter line with plenty of zip, and one that is made up of in-form players.

A head injury to John Cooney means that Dave Shanahan starts at scrumhalf, with Billy Burns presumably taking over the place-kicking duties.

The Cheetahs are currently operating on two fronts, the Pro14, where they have been beaten in all three matches, and the Currie Cup in which they have lost five. As a result anything other than a victory for Dan McFarland’s unbeaten Ulster would constitute a disappointment.