Leinster find their bonus in taking the wide approach against Edinburgh 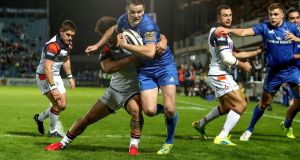 Leinster’s Johnny Sexton goes over for a try despite the tackle of Edinburgh’s Juan Pablo Socino during the Guinness Pro 14 game at the RDS. Photograph: Dan Sheridan/Inpho

On a day which also saw the Scarlets, last season’s main rivals suffer defeat, Leinster assumed leadership of Conference B of the Guinness Pro 14 with a largely satisfying and emphatic bonus-point win over Edinburgh at the RDS. By and large they looked what they are, namely the champions.

The only real blemish on Leinster’s night was James Ryan leaving the field to undergo a HIA in the 20th minute, and presumably failing it as he never re-appeared, and Dan Leavy, barely 10 minutes after his delayed seasonal bow, following suit.

This was the result of Edinburgh’s replacement loosehead prop Pierre Schoeman leading with his forearm into Leavy’s face when carrying into contact, in what was virtually an elbow into the jaw. After recourse to video replays, and consulting with his TMO Simon McDowell, Welsh referee Dan Jones sent Schoeman off. While one had some sympathy for him, and he was clearly contrite, even if a black card was an option, one would hope that a red would still have been brandished.

By then, the die had long since been cast. The biggest difference between the sides – more a chasm really – was the width, ambition, variety and skill which Leinster played with as against the altogether narrower constraints of Edinburgh’s running game. The ball regularly reached the Leinster wingers – the effervescent James Lowe and Fergus McFadden – on either touchline, in utter contrast to the visitors. At one point, off attacking mauls, Edinburgh first went through innumerable one-off runners and then narrowed their focus even more with 27 ‘pick-and-jams’ in a row, give or take. This was pure stick-it-up-the-jumper rugby.

Leinster rolled their sleeves up and repelled them all, and it said much that Edinburgh made less passes (80 to 118) in the first half despite having almost 60 per cent possession.

They also had more X factor in the likes of Lowe and Jordan Larmour, and enjoyed the benefit of a solid platform up front, where the Leinster scrum was dominant. Cian Healy augmented this with his typically belligerent ball carrying in a man of the match performance.

Wonderful takes by Devin Toner, from the kick-off, and Lowe, reclaiming the first box kick, drew a line in the air, so to speak, before Lowe’s counter-rucking and Ryan’s line speed ended Edinburgh’s first multi-phase attack.

Leinster responded with one of their own after Jack Conan and Johnny Sexton pulled passes back to beat the blitz defence and release Garry Ringrose, although the latter was flattened by Sean Kennedy’s late hit. On rejoining the fray, Sexton promptly hit a couple of rucks before both Healy and Luke McGrath lost control of the ball in plunging for the line.

On a cool but relatively ideal autumnal evening, the breakthrough, when it came, was entirely due to the work of two Leinster warriors in the relative autumns of their careers. Toner, having come close to blocking down Kennedy’s previous box kick, managed to do so, and as the crowd willed him to score what would have been his fifth try in 220 games for the province, he stealthily stooped to gather on the run only for Kennedy to make the recovering tackle.

Nonetheless, he had the presence of mind to lay the ball behind him for McFadden, following up, to pick up and muscle over for the try – his 26th in 172 games for Leinster, and his second in two games this season. Sexton even managed a fine conversion from wide to the right.

Thanks to a fabulous penalty from half-way to within five metres of the Leinster corner flag by Jaco van der Walt, Edinburgh laid siege to the home line with successive lineout mauls that were held up. For the first, they resorted almost exclusively to one-off runners, and then for the second came those 27 consecutive pick-and-jams in a blunt 32-phase attack. And after resorting to more one-off runners, Van der Walt’s grubber was easily read and cleared by Larmour.

When Kennedy knocked on, a big Leinster scrum had them knocking on the Edinburgh line again, Healy rumbling through three tackles to underneath the posts before Mick Kearney, on for Ryan, fumbled at the base.

Home crowd, the big screen and the TMO combined to have one lineout throw overturned in Leinster’s favour after Lowe had offloaded just before being tackled into touch, the ball thus going over the touchline off an Edinburgh head.

It brought dividends too, in the shape of a superbly executed try straight out of the Leinster playbook and off the training ground. Robbie Henshaw trucked it up before Toner showed deft handling skills for McGrath to wrap around the big lock and Sexton feinted an inside pass before transferring to Larmour, who’s one-handed offload enabled Lowe, fittingly, to finish off the move on his opposite wing.

Sexton couldn’t convert this time, but it ensured a 12-0 interval lead.

Edinburgh came out with a Richard Cockerill flea or two in their ears, Duhan van der Merwe escaping McFadden’s clutches to gallop up the wing and offload to Chris Dean before, a few recycles later, number eight Magnus Bradbury took the tackles of McGrath and Ringrose to score from close range. Van der Walt converted to trim the lead to five points.

Leinster responded like champions. McFadden, Henshaw and Ringrose all made good yards before a sweeping right to left move ended with Lowe stepping Kennedy to touch down. But after recourse to the TMO it was rightly ruled out as Van der Flier’s final pass was forward.

Unperturbed and undeterred, Leinster worked another sweetly conceived move when Henshaw took McGrath’s pass and pulled the ball back for Sexton to link with Larmour. He stepped two would-be tacklers in trademark style to score under the posts – his 10th in just 25 games for his province.

Leinster pitched tent in the Edinburgh 22 in pursuit of their bonus point, which duly arrived on 65 minutes. Fittingly, a rock solid scrum laid the platform, McGrath going to a well manned blindside where Sexton dummied to Lowe and took the tackle by Juan Pablo Socino to score it himself.

It was also his 25th try in Leinster colours which, at exactly one per six games, is a very healthy strike rate indeed. His final act of the evening was to land another touchline conversion, taking his career haul to 1,370 points in his 150 games.

The game was petering out to a subdued finale, many making their way to the exits, when Leinster showed another arrow in their quiver when transitioning from defence to attack off a turnover inside their own 22. With Van der Merwe sacrificed to accommodate the return of Allan Dell after Schoeman’s red card, Ringrose exchanged passed with McFadden to score from almost half-way at an untouched canter.