Rugby World Cup 2019: The teams in contention for Japan

With one year to go before the tournament, who’s going to rise or fall in the east? 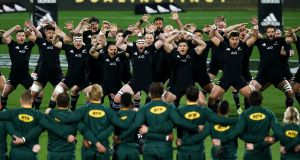 New Zealand players perform a haka during the Rugby Championship match between the All Blacks and the Springboks at Westpac Stadium in Wellington, New Zealand, last weekend. Photograph: Hagen Hopkins/Getty Images

Hubris is their only real opponent. Beauden Barrett and Damian McKenzie refusing to imitate Dan Carter, by dropping the simplest goal imaginable in Wellington, so losing to South Africa reborn under Rassie Erasmus, proved these All Blacks are beneath the 2015 vintage – for now. But fix Brodie Retallick’s shoulder, make Jack Goodhue the resident centre, take the kicking tee away from Beauden Barrett and there is no ceiling.

Unless the Beauden problem is unsolvable. This two-time world player of the year (2016 and 2017) is performing better than ever since embracing the perils of stalled distribution on the gainline, gleaned from Johnny Sexton, but this is the nation that dropped Buck Shelford before the 1991 World Cup (for Zinzan Brooke).

There is always an alternative. The dazzling Crusaders outhalf Richie Mo’unga has profited from Ronan O’Gara’s tutelage to make a quantum leap in conversion rates – 65.63 per cent in 2017 up to 80 per cent-plus during this season’s Super Rugby campaign.

Cut Barrett? Hard to see Steve Hansen bowing to external noise or returning him to fullback (where little brother Jordie should make way for Ben Smith), so this could conceivably be the rock New Zealand crash upon in their quest for three-in-a-row.

Even with a 30 per cent kicking return, who can topple them in Yokohama on November 2nd, 2019? The Springboks, maybe. Surely not Ireland, as history tells us they’ll be too battered to finish the job.

They got lucky in Wellington but Jacques Nienaber must take a theatrical bow for the Springboks’ organised and physically unrelenting defence despite conceding six tries.

South Africa are the second-best team in the world for the same reason they have always been: their brightest tactical mind has retaken the reins while their best players, regardless of race or current abode, are being selected.

Their depth of quality in almost every position could be what screws Joe Schmidt’s Ireland into oblivion on October 20th, 2019 (the quarter-final).

The “God of Thunder”, Duane Vermeulen, is still to return – but where? The pack is being rebuilt upon the mobile brilliance of Warren Whiteley.

Even Eben Etzebeth is struggling to keep RG Snyman out of the four jersey while Tendai Mtawarira has been passed by Steven Kitshoff.

More menacing than ever, with a year of improvement to follow, this cannot be a mirage.

Suddenly everything would seem possible.

Right here, right now, Conor Murray is injured and while John Cooney’s career has come alive in Ulster, Ireland will not capture the Webb Ellis trophy without the Munster scrumhalf.

Like Cooney’s move to Belfast, Joey Carbery’s switch from blue to red feels like the final piece of Schmidt’s masterplan; there is acceptable cover in every position, especially now Will Addison and Andrew Conway are behind established fullback Rob Kearney.

The Danny Cipriani conundrum. Eddie Jones refused to include Cipriani in his training squad despite the wonderful range of passing on display for new club Gloucester almost overshadowing the nightclub incident. Perhaps Jones, like Hansen, would see an about-turn at this stage as weakness.

But some other ingredient is needed. At what point does new defence guru John Mitchell suggest an altered midfield of Cipriani, Owen Farrell and Manu Tuilagi as essential for England to scale the mountain they slid further and further down during last season’s abysmal Six Nations followed by the series loss in South Africa?

November opens with Boks then Blacks rolling into Twickenham. A pack led by Maro Itoje and Billy Vunipola is capable of matching these southern beasts but Jones, as a matter of urgency, needs to settle upon his best XV.

In Cheika they must trust. It took the fashionista a full four years to mould Leinster into European champions. Three defeats from four Rugby Championship outings on top of the Test series loss to Ireland can all be erased by the Wallabies banding together to remain the ultimate World Cup nuisance.

Despite a blatant lack of quality in key positions – mainly outhalf, where neither Kurtley Beale nor Bernard Foley are the solution (Matt Toomua or Quade!?) – they still possess two of the greatest players the game has ever seen in David Pocock and Israel Folau. The pair have polar opposite views on modern societal norms – Folau being on record stating all homosexuals are going to hell – yet they embraced like long-lost brothers after Folau’s sensational try against Argentina (yes, his refusal to pass lost them the same match).

They have the players. Les Bleus would be a constant top-three nation if not for generations of mismanagement and a domestic league overflowing with South Africans, Pacific Islanders and Georgians.

See past the shambolic defending on their tour of New Zealand last summer and you find glimpses of magnificence in Wesley Fofana, Gaël Fickou and Teddy Thomas. Flick off the dormant switch by cementing Morgan Parra and Mathieu Bastareaud – who only got five weeks for assaulting Christophe Samson – in every starting XV, make Paul O’Connell the forwards coach and obey a modern fitness regime. Voilà.

Post World Cup planning, while impressive in theory, is irrelevant.

Job One: beat Australia, something Warren Gatland’s era has failed to achieve in 13 attempts; until this happens they cannot be considered genuine contenders. Would have been no harm to give Wayne Pivac a free shot at 2019 with Gatland following Sam Warburton out the door, but the loyalty is understandable.

Still, the Scarlets players will only partially convert the Pivac way into a national attack guided by Seán O’Brien’s best mate Rob Howley.

Mario Ledesma has them winning matches and competing with the All Blacks. That means the Pumas are operating well above expectations as the appointment of the former Clermont hooker has brought more than the expected viciousness. There’s a sharpness to their attack, mainly due to the spine of the team lining out for the Jaguares in Super Rugby, coached by Gonzalo Quesada, and while this structure demands expansion to be sustainable, the control of players is ideal World Cup preparation. Play-maker brilliance of the Juan Martín Hernández or Felipe Contepomi ilk is lacking, but they are stocked with pace while up front Tomás Lavanini and Pablo Matera are world-class.

Nobody wants to lose their forwards coach a year out from the big show, but Dan McFarland is Ulster’s now, so Gregor Townsend must make do.

Glasgow remain a joy to behold when Stuart Hogg takes off, while Edinburgh are making clear strides under Richard Cockerill, but the player drain remains an issue, especially if Finn Russell suffers the same fate as Johnny Sexton did at Racing in 2015. Sexton’s body never fully recovered, Schmidt has stated, and Scotland are in a similar developmental stage to Ireland four years ago. So much hinges on Russell, who will be flogged in Paris.

Jamie Joseph has probably put all his eggs in one venue: the International Stadium Yokohama on October 13th, 2019. That being their last Pool game, and presuming the Samoans don’t get their act together, the big Kiwi coach has to engineer victory over the Scots to surpass Eddie Jones’s Springbok-toppling feat of 2015. Unlike previous tournaments, the hosts are being treated like a Tier One nation with an eight-day lead-in, while Scotland must cope with a four-day turnaround after facing Russia.

Same old story, unfortunately. Most naturally gifted rugby nation on earth gets ravaged by French club academies or the lure of a better life in New Zealand and Australia before heading north for the serious cash. Dominating the Pacific Nations cup during this World Cup cycle counts for little, but a Pool containing the Wallabies, Wales and Georgia is crying out for Nemani Nadolo and Semi Radradra to cause some havoc.

Conor O’Shea will probably not improve the Azzurri’s place in the world order, but he remains on course to leave Italian rugby in its healthiest-ever state. Treviso and Zebre have both produced winning starts to the Pro14 while Steve Aboud is laying the underage structures that will eventually produce world-class halfbacks to guide the Italian pack where they need to go. Forget this World Cup. They are in with All Blacks and Springboks.

Another genuine rugby nation, with a stream of grizzled props and locks dominating in the Top 14, but until the Six Nations opens the gates they can never make sustainable gains. Rugby is either a global game or it isn’t. The treatment of Georgia says it isn’t.

Beat Scotland in June to show the value of appointing Gary Gold, not to mention Irish attack coach Greg McWilliams, but until rugby becomes a fully fledged varsity sport, the United States remains a sleeping giant. The possibilities of rugby breaking into this market are limitless. The will is there and so is their properly funded professional league.

Victory over Fiji in June shows that if they are anyway organised, England, France or Argentina could be caught cold.

Another pure rugby nation, racked and ruined by corruption, with each World Cup showing what they could do if the sport had a level playing field. At least one Irish player is bound to be taken out in the Pool encounter.