Connacht up and running with Zebre win

Andy Friend’s side secure bonus point at the Sportsground 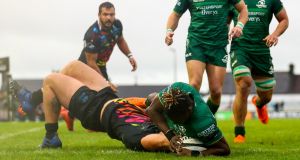 Paul Boyle’s first-half brace of tries put Connacht on course for a 32-13 bonus-point win over Zebre at a rain-hit Sportsground. The 21-year-old back-rower scored twice on only his second Guinness Pro14 start for Connacht, who led 17-3 at half-time with Jack Carty kicking seven points and his opposite number Carlo Canna landing a penalty.

Bouncing back from last week’s narrow loss to Glasgow Warriors, Connacht were 10 points up in as many minutes. Man-of-the-match Boyle burst onto captain Jarrad Butler’s hanging pass to reach over and Carty neatly converted, supplementing his earlier penalty.

Zebre disrupted the hosts’ lineout but Connacht were very much on top in the scrum, with 21-year-old tighthead Giosue Zilocchi under regular pressure. The set-piece platform, combined with an improved maul, paved the way for Boyle’s 20th-minute effort, the young number eight stretching over past George Biagi and David Sisi.

After Carty converted again from the left, Zebre got their attack firing with Canna knocking over a central 25th-minute penalty. They were denied a maul opportunity by a Boyle lineout steal, while their new Tongan flanker Matu Tevi lost control of the ball on the try-line before a prior infringement by Andrea Lovotti was spotted on the TMO review.

Zebre leaked a fifth scrum penalty before the break, and although Carty’s kick curled narrowly wide, Connacht’s stranglehold of the scrum saw Zilocchi binned five minutes into the second half. Hooker Oliviero Fabiani swiftly joined him in the bin for his late hit into Denis Buckley’s back. The 13 men held back Connacht’s first surge but an advancing scrum set up Blade for a snappy finish in the right corner.

Canna pulled back three points after Dave Heffernan was slow to roll away and Zilocchi and Fabiani returned with Michael Bradley’s men still in the contest. However, right on the hour mark, Carty brilliantly dangled a kick through for centre Griffin to slide onto and score in the left corner.

Australian flanker Colby Fainga’a came on to make his Connacht debut before Boyle teed up try number five from replacement Adeolokun. Finishing strongly, Zebre could have had two late tries but had to settle for one from Bisegni who dived over from replacement Guglielmo Palazzani’s threaded kick towards the posts.