Veteran secondrower had an exceptional season last year, losing just one game in 30 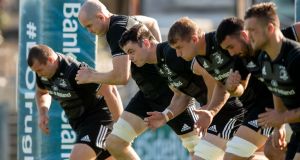 Devin Toner, James Ryan and their Leinster team-mates training this week ahead of their away game to Scarlets. Photograph: Morgan Treacy/Inpho

Entering his 14th season with Leinster’s first-team squad, and 13th as a professional given he won his first two caps while still in the province’s academy, Devin Toner admits plenty has changed.

Leinster have become serial trophy haulers in that time, with four Heineken Champions Cups, five Pro14 titles or their equivalent in previous guises, and a Challenge Cup. Toner proudly looks at the photographs on the wall in the room at the province’s UCD base (somewhat advanced on the portakabin they operated from in the early 90s) and where he is holding court.

There is a melange of triumphant squads in blue celebrating their latest successes, and there’s even a hint of wonder in his eyes.

“I think I’m in nine of them. I’m always in the background behind the Cup.”

Toner’s frame has rarely been leaner, and far from being sated by his most rewarding season ever, he is as hungry and enthusiastic as ever too. Apart from being extraordinarily durable (he has played 30 games in five of the last seven seasons, and 26 and 28 in the other two) as is so often the case, with age comes wisdom, and especially knowing his own body.

“I feel great to be honest. I can’t wait to get going, looking forward to it. I am only 32; got a fair bit left in me. I said last year I lost a bit of weight and I’ve kept it off. I’m in and around 124-125 [kilos] and I feel good in myself. I feel good in the gym, feel like I’m getting around the place a bit better than I use to. I was at 132kg at one stage and I was lumbering around the place. I feel better jumping in the lineout, feel better in myself.”

Other younger, more dynamic locks have come along in recent seasons but Toner has remained Leinster and Ireland’s primary ball winner and added more ball carrying to his big tackle count and work rate at the breakdown.

“It was one of the things that I wrote down this year as well – I want to get on the ball a bit more. Hopefully I do.”

Accordingly, he is the most capped player in Joe Schmidt’s tenure over the last five seasons, having played in all but five of those 58 Tests. Last season, Toner was an integral part of Ireland’s success, playing in 10 of their 11 games. Beginning with the full 80 in the win over South Africa, he was ever present in the Six Nations (starting three and seeing out the end games in Paris and Twickenham) and, after being rested for the first Test in Australia, played all but four minutes of the remaining wins over the Wallabies.

Toner had been on the bench in Leinster’s three previous European Cup final wins, but started all nine matches in the competition last season including the Bilbao final, and indeed he played every minute of the knock-out stages of both tournaments in Leinster’s historic double.

“It’s hard to talk about how much it means but yeah, it was absolutely brilliant. It was unbelievable. I think I only lost one game (out of 30) last year and that was the Connacht game. To come off a season like that, it was unbelievable, to be honest, yeah.”

You’d wonder how on earth he, or they, can follow it up, but according to Toner you just have to wipe the slate clean.

“Every pre-season you go on holidays, you kinda forget and then you go in again, you’re starting from scratch again really. You obviously reference back to what happened and everything and what we want to emulate, but what we are talking about this year is that we do want to get better.

“Obviously that Connacht game was an example of how we didn’t perform well. We didn’t perform well at a lot of stages last year, so we have to be better than that. You can see every other team is getting better as well, so it’s just one of those things.”

Perhaps having had a late developing career was also something of a blessing. He was 27 when Schmidt assumed the Irish reins, and had only won seven caps, and by the age of 22 he was still uncapped and had played only 12 games for Leinster. James Ryan, who turned 22 over the summer, has already won 11 caps for Ireland and played 15 times for Leinster.

“I look at him and I go, ‘you have got 13 more years left in you.’ I’m not jealous of that at all!” says Toner in mock laughter.

“These days, there aren’t any project players any more. You can’t look at someone and say, ‘we will give you three or four years to get you right.’ As soon as they come out of school, they are ready to go. It’s mind-boggling how they do that. It is a testament to how well the schools are doing. They are starting weights when they are in fourth year. I didn’t even start weights until I left school, even a year after that.”

In that sense, you wonder if Toner is the last of a dying breed. “I think so, yeah, to be honest.”

What makes Toner’s numbers all the more striking is that in recent seasons front-liners have tended to play nothing but high-stakes games, be they interpros, European games, international Tests and knock-out ties, with maybe a seasonal opener at home to ease them back. Not so this season, given Toner’s seasonal reappearance is expected to come against the Scarlets away on Saturday.

“We haven’t won there since 2013. They’re obviously a team we know very well. They’re going to want a bit of revenge from last year, but it’s going to be one of those big ones. It’s a bit of a healthy rivalry at this stage.”

Once more into the coalface then.

Joey Carbery’s cameo seals Munster win over Cardiff 22:16
Japan to begin letting Olympic athletes in from next month – report 21:24
Formula One revenues fall 43% as pandemic takes its toll 21:19
Bundee Aki and Connacht get out of jail against Benetton 20:59
Make or break for Eddie Jones and England against resurgent Wales 20:30
Here is your handy guide to sport on television this week