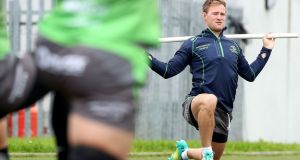 Kieran Marmion training at the Sportsgrounds in Galway ahead of Connacht’s clash with Zebre. Photograph: Bryan Keane/Inpho

Ireland scrumhalf Kieran Marmion is expected to make a return to duty for Connacht when they host Zebre at the Sportsground on Saturday.

The 26-year-old, who, along with Bundee Aki was unavailable for last weekend’s Guinness Pro14 opener due to national management requirements, is available for selection. However, it is expected Aki must wait another week.

Connacht backs coach Nigel Carolan says both have returned to full training this week, but it had been agreed the New Zealander would not be available until next week’s visit to Edinburgh.

Connacht were also awaiting an update on number eight Eoin McKeon, who was due to be reviewed by a specialist yesterday after taking another knock to his shoulder, while fellow backrow player Robin Copeland is “close” to a return, once fully recovered from a quad twinge. Also sidelined are Eoghan Masterson (hand), James Connolly (shoulder), and Australian David Horwitz (hamstring), but good news is the return to full fitness of experienced hooker Tom McCartney.

McCartney was involved in last year’s first ever home defeat to the Italian side in a season in which former coach Michael Bradley, who had spent seven years coaching Connacht, masterminded a double over the westerners, and Carolan says Zebre is not a team to be underestimated.

“We felt last year our standards were not at the level we held ourselves to, so that is the focus this week – to make sure we are better again in everything we do, all our preparation, our recovery, our attention to detail is up there because we do not underestimate Zebre in any shape or form, and when our standards drop, they will pounce, as they did last year.”

Losing to Zebre by 19-11 at the College Road venue last February was probably the nadir of a see-saw season that contrasted with three home wins against the Irish provinces.

Connacht are particularly aware of Zebre’s unpredictable attack that cut them apart last season, heightening the need for an improved defence having allowed Glasgow to bag four tries last weekend.

“Zebre’s attack can be very loose, it can be ragged, it can be haphazard, but it’s also very dangerous because it can be unpredictable. It very much revolves around Carlo Canna, and he’s very effective, but any chance they get to speed it up, offload, get in behind, to grubber, to make it ugly, it seems to suit them.

“So we don’t want to be dragged into an arm wrestle. It is very much about us maintaining our attack structure. We have to be direct as well, and cannot afford to get loose, because they are very dangerous.”