Leinster’s Josh van der Flier could return against the Scarlets 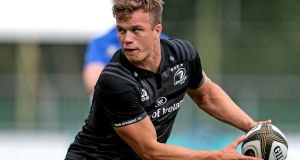 Josh van der Flier is back in full Leinster training and available for selection against the Scarlets. Photograph: Laszlo Geczo/Inpho

Leinster have been boosted by the return of flanker Josh van der Flier in time for next Saturday’s reprise of last season’s Guinness Pro14 final against the Scarlets in Llanelli.

The 25-year-old hasn’t played since suffering a serious knee injury in the first half of Ireland’s dramatic opening Six Nations win against France in Paris. He had begun that game impressively and had been a regular starter for Leinster, but his misfortune opened the door for Dan Leavy as van der Flier was cruelly forced to watch Ireland’s Grand Slam, Leinster’s double and the series win in Australia from the sidelines.

“He’s back in full training so he’s available for selection,” said Leinster assistant coach John Fogarty this afternoon. “It’s brilliant that he’s back. He’s worked so hard and it’s good for Ireland as well that he’s back on his feet.”

Against that, winger Barry Daly suffered an injured knee in the early stages of last Friday’s 33-32 win over Cardiff, and will be sidelined for a few weeks pending a “a small procedure”. It has also transpired that Nick McCarthy injured his wrist in training last week and will also be unavailable for a few weeks.

Fogarty admitted this has stretched Leinster a little at scrum-half. “When you lose a player in a specialist position like hookers and nines, they’re pretty important, so it doesa little bit. But there’s that wiggle room in that it gives us an opportunity to see Hugh O’Sullivan in training sessions and he’s going quite well.”

Luke McGrath started last Friday’s seasonal opener and Jamison Gibson-Park made a significant impact, as did most of the bench, in scoring one of Leinster’s tries, but Gibson-Park is one of their non-European passport holders whom the management have to rotate along with James Lowe and Scott Fardy.

“Lukey and Jamo are up and running so there’s a bit of management with that rotation [of the ‘non-European’ players], but it gives us that shot for Hugh and we’ll see what he looks like.”

Some of Leinster’s summer tourists with Ireland are expected to return in the next few weeks, in a few cases even this week.

“There’s always going to be players returning at this time of the season so we’ll see how they go through the week,” said Fogarty. “It’s timely because it’s a huge game. It’s a tricky start to the season for us, away to Cardiff Blues and away to Scarlets in the second game. There’s a lot of history there; we played them four times last season in some big games. We’ll need to have an improved performance and getting some players back in is a help.”