Adam Byrne: ‘Everyone in the building believes they’ll play for Ireland’ 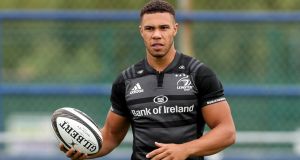 Self belief is the Leinster mantra as they enter a new season defending their European Champions Cup and Pro14 league double. Every player picked for the club is encouraged to believe they can play at the highest level.

The culture of Leinster, who narrowly beat Cardiff in their opening game of the season in the Pro14, is to instil confidence and ensure players believe they can earn a place in bigger games regardless of international status.

And Adam Byrne, who made his Irish debut against Argentina in 2017, believes his Leinster team are among the best club sides in the world.

“In my opinion the best team in Europe,” said the winger of his Leinster side. “I think the best in the world. It would be nice to someday test it against some of the southern hemisphere clubs.

“But you have to believe in yourself and I’d like to think everyone in the whole building believes they will play for Ireland or eventually will make that step up. The environment allows us to believe that and everyone encourages it. I would say everyone believes that.

“I think if anyone didn’t have that belief maybe they’d want to start getting it. It doesn’t matter if you have 100 caps or five or 10 caps, whoever they think is best suited for that game that week . . . they won’t hesitate to select them.”

Facing Scarlets this week in Llanelli that self confidence will be put to the test after a flawed performance at the Arms Park. Leinster and Scarlets have a history of meetings, the last one in the Pro 14 final in May when Leinster won 40-32.

“It seems like we play Scarlets every second week,” said Byrne. “There is a big rivalry, I guess between us. We’ve met in finals and semi-finals. It’s always a tough game. They play a great brand. It’s really attacking. They play with good width.”

Despite the standards, the early season rust and last week’s late win there is much room for improvement.

“Looking back, going away from home first game, getting the win and the bonus point as well we’ll take a lot from that,” added Byrne. “It was far from our best performance. But to still come away with a win and have stuff to work on puts us in a good place going in against the Scarlets.”

Prominent owners terminate contract as Gordon Elliott’s yard sponsor 09:45
Gianluigi Buffon at 43: why messing up is key and what makes him happy 09:39
Manchester City go 15 points clear; Gordon D’Arcy on what we can learn from Italy win 07:36
Gordon D’Arcy: Ireland merely picked through the carcass of Italian rugby 06:00
Munster looking to drive home their advantage on Thomond Park run-in 06:00
Here is your handy guide to sport on television this week