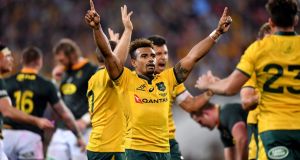 Will Genia Australia celebrates their victory over South Africa in the Rugby Championship. Photo: Darren England/EPA

They were more lucky than good but the Wallabies were delighted to lift the gloom permeating Australian rugby as they edged the Springboks 23-18 at Suncorp Stadium in Brisbane.

The Springboks dominated the first half, only for a freakish Matt Toomua try to keep them within touching distance at the interval, before desperate defence saw them hold out in the closing stages in front of a disappointing crowd of 27,849.

It appeared a third consecutive tie between the sides could be on the cards when Francois Louw was awarded a try with two minutes on the clock but the TMO adjudged a double knock-on from Kurtley Beale and Malcolm Marx in the lead up to the try.

Ultimately, two second-half penalties from man-of-the match Toomua, after flying back for a final game for the Leicester Tigers last week, decided the game in the Wallabies’ favour.

As is so often the case for the Wallabies, the key antidote to ending doom and gloom was to play anyone but the All Blacks.

After back-to-back humblings and a horror 24 hours before the game, where key trio David Pocock, Israel Folau and Adam Coleman were ruled out, Michael Cheika’s side had enough excuses not to deliver against the Springboks but they showed real resilience to edge home.

The Wallabies’ fortunes improved immediately from the first whistle and Michael Hooper opened the scoring in the second minute.

Kurtley Beale, moved into fly-half at the expense of Bernard Foley, sparked immediately breaking the line and feeding Lukhan Tui to race down the left touchline to put them within touching distance of the try-line and eleven phases later the skipper dived over for his 16th Test try.

After the try, the Springboks dominated the next 15 minutes. Their tactic was clear, to utilise Bongi Mbonambi’s pinpoint line out delivery to set up mauls which Australia struggled to contain. From this tactic Mbonambi eased over to score the Springboks’ first try.

Australia’s line-out woes again haunted them when Genia could not take a feed back cleanly and was tackled in the in-goal area.

Soon afterwards, a smart pass wide from Faf de Klerk to Makazole Mapimpi saw him dive over for a try to extend the lead.

What the line-out gods took they gaveth back when Mbonambi’s errant throw cleared his Springbok jumpers, and skidded across the field in front of the posts where Toomua dived on the ball and glided over the try-line.

Despite a massive disparity in possession and territory statistics, a massive 53-yard metre penalty from ‘super-boot’ Reece Hodge brought the Wallabies within a point at half time.

The Wallabies came out for the second half the sharper and a moment of inspiration from Will Genia running down the left touchline almost resulted in a try after which the Wallabies camped in the Springboks’ 22.

Some desperate tackling plus Rob Simmons dropped a ball with the try-line gaping and Marika Koroibete’s ill-judged attempted off-load saw them hold on to their narrow advantage.

Toomua’s two kicks was the only second half change to the scoreboard with South Africa left to rue handling errors - Willie le Roux the key culprit with three knock ons - as the Wallabies prevailed in an increasingly feisty encounter to keep hold of the Nelson Mandela Plate.

The Wallabies next face Argentina while the Springboks face a trip across the Tasman to face the All Blacks.

An experimental New Zealand team was forced to dig deep on Saturday to beat underdogs Argentina 46-24 at Trafalgar Park in Nelson.

Argentina have not beaten New Zealand in 26 previous Tests but, boosted by their recent win over South Africa, they scored the first try in each half to keep the All Blacks under constant pressure.

New Zealand held an unconvincing 18-14 lead after 50 minutes but a try-scoring double by scrum-half TJ Perenara, and tries from returning winger Nehe Milner-Skudder, captain Kieran Read, Shannon Frizell and Jack Goodhue allowed the All Blacks to escape and retain their unbeaten record in this year’s Championship.

The ball-carrying by Frizell and other forwards such as Scott Barrett and Codie Taylor was the best part of an otherwise disjointed All Black performance. For the Pumas, Ramiro Moyano scored the early try, while fly-half Nicolás Sánchez scored a try, penalty and three conversions to overtake Felipe Contepomi as Argentina’s leading scorer for Argentina in Tests. – Guardian service