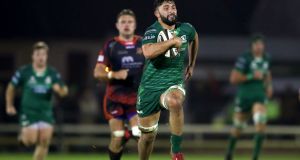 Connacht secured a valuable bonus-point win over the Dragons to keep the pressure on the top four in the Pro 14 Conference A.

With seven changes to the side that disappointed against the Ospreys last week, Connacht produced a more energised performance and were well on their way to victory after taking a 26-0 lead into the second half.

“You have to take opportunities, and tonight we did,” explained coach Andy Friend afterwards. “Between the 24th and 29th minutes the game opened up and we were pleased with the opportunities we created.

“Tonight was crucial and I am really pleased with the way we rallied after losing last week and made sure we didn’t make the same mistakes tonight.”

After dominating the opening 20 minutes, Connacht finally broke the deadlock with the first of four tries before the interval. Lock James Cannon claimed the honours from a line-out drive 10 metres from the line, and outhalf David Horwtiz, in his first start for Connacht, judged his conversion into the wind perfect.

Prodigious kicking paved the way for the second four minutes later - flanker Sean O’Brien putting boot to loose ball before Tom Farrell’s punt down the touchline which was finished by right wing Darragh Leader, also in his first start of the season.

The home side played with an intensity lacking in last weekend’s loss to Ospreys, none more so than centre Farrell and left wing Colm de Buitler, whose determined chase back in defence provided the platform for the third try. It was end to end with Horwitz making the break before a supporting Farrell supplied Fainga’a who raced in from the 10 metre line.

Minutes later a dominant scrum provided the platform for the bonus-point score and from a series of close-in drives hooker Tom McCarthy dived over, with Horwitz adding the extras for a 26-0 lead.

Although Friend’s side started the second half where they left off, they were denied a try by TMO, and with all replacements making an appearance, including a 100th for Eoin Griffin, the momentum dissipated. The visitors capitalised on a rare penalty before centre Jarrad Sage combined with replacement lock James Thomas who carved a gap for Hallam Amos to score.

Connacht’s superior scrum was once again influential in their final try, putting them on the front foot. And from a sweeping backline left-to-right move, Farrell touched down with replacement Jack Carty converting.

Although number eight Taine Basham scored a try at the death, it was of little consequence to an under-pressure Bernard Jackman and a struggling Dragons looking for their first away win this season.