Pressure on Eddie Jones to deliver against hungry Springboks

There are those at Twickenham, including some senior figures, who are weary of the Jones era 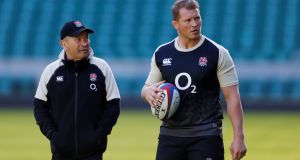 Sometimes international sport feels less like a game than a game show. Supply the right answers under pressure and you can stay. Get it wrong and you are gone. Entertain before the ad break or get the hell out of town. Twickenham, once the spiritual home of English restraint, is as obsessed these days with instant gratification as anywhere else.

Nor does it help that English rugby union is currently hostage to a crazily spinning wheel of fortune. As recently as 10 months ago Eddie Jones was a world class boss and the future was shiny bright. And now? The Springboks, staring into the abyss before Rassie Erasmus’s intervention, cannot wait to get stuck into one of the least settled red rose packs of modern times.

Not all of this, clearly, can be laid at Jones’s door. Coaches, even obsessive ones, are not immune to freak injuries or ill luck, as underlined by Manu Tuilagi’s late withdrawal from the bench with a minor groin strain. Given England have already lost the reassuring armour plating of Billy Vunipola, Mako Vunipola, Courtney Lawes, Joe Launchbury and Nathan Hughes, Jones must have run over a black cat somewhere.

That said, England’s supporters are starting to ask questions they would prefer not to be considering with the 2019 World Cup just over the horizon. What happens, regardless of injuries, if South Africa’s power game endures and England end up well beaten on the opening weekend of the Quilter autumn series? Next up are New Zealand, still the world’s number one ranked side.

Another loss to the All Blacks and Jones’s England could be staring at seven defeats in their last eight Tests, with Japan and Australia to come. The words “fortress” and “Twickenham” have not been seen in the same sentence for a while.

Is this, ultimately, reason to panic unduly? As Jones well knows from his days in charge of Japan, reputations are largely made or shattered at World Cups. It remains his belief that everything else is essentially a stepping stone. Maybe, but only if the Rugby Football Union is still employing him next September.

There are those at Twickenham, including some senior figures, who are already weary of the Jones era and will shed few tears when it is time to part company.

This was not the anticipated legacy when Jones arrived but, latterly, the head coach has resembled a frustrated angler for whom the fish have stopped biting. The final bill for last summer’s losing tour in South Africa was apparently far in excess of the supposed budget and the expensive hiring of John Mitchell also prompted internal RFU disquiet.

No one disputes Jones’s expertise as a turnaround specialist but sustaining that initial success remains a work-on. Take this week’s hiring of Will Carling as a leadership mentor: if it works then fair play but there is more than a whiff of headline-grabbing short-termism about it. If Owen Farrell needs any advice on elite captaincy it would be far easier – and cheaper – to call his father.

Unless Jones is saving his best until last, the RFU also risks inheriting a gaggle of globe-trotting assistants, stunting the growth of English-reared coaches aside from Steve Borthwick and enduring another below-par World Cup. Which is why a positive start on Saturday matters so much. Beat South Africa and stand up to the All Blacks and Jonestown becomes a happy-clappy place once again. If, alternatively, England start limply, their new combinations struggle and the crowd grows impatient, it will be harder to pacify those wondering how many clothes the emperor is actually wearing.

Unfairly fine margins? Inflated expectations at odds with reality? Possibly. Jones is hardly the first England coach to suffer from the conflicting interests of club and country. But let it be remembered England are still the best resourced rugby nation on the planet. No other nation could have spent this past week training in foreign climes with no expense spared. The players do look impressively fit but, frankly, so they should. Rather more pertinent, even more so than Saturday’s result, is how they collectively perform.

What a vindication of Jones’s methods it would be if they were to skip back from Portugal, reproduce all those nifty Algarve training moves in the cooler surroundings of Twickenham and rock the Boks with their quick thinking, accurate execution, tactical acumen and desire. What if Farrell dominates at number 10, Ben Te’o and Henry Slade click from the outset and the unfamiliar back-row trio of Brad Shields, Tom Curry and Mark Wilson outplay their opposite numbers? It would suggest Jones still has the Midas touch and restore the public faith and trust which might otherwise crumble away.

It makes for a tantalising afternoon all round. If Maro Itoje has a stormer and Farrell kicks his goals, a thrilling England victory would totally alter the autumn mood music. Just as likely, on the balance of probabilities, is that Malcolm Marx and Eben Etzebeth will flex their world-class muscle, Damian Willemse will be confirmed as a shimmering new running talent and Aphiwe Dyantyi will supply further evidence of his finishing ability.

The ultimate nightmare for England, further injuries aside, would also involve Mitchell’s new defensive structure being repeatedly sliced open, Kyle Sinckler enduring a tough day in the scrums opposite the energetic Steven Kitshoff and the Australian referee Angus Gardner repeatedly pinging the hosts at the breakdown. Territorial supremacy will be vital, particularly in the first quarter. If there is one area South Africa will be mighty keen to examine it is England’s defensive maul in their own 22.

On the flip side neither Faf de Klerk nor Willie le Roux, who add so much pace and zip to South Africa’s game, are available on this occasion. The Springboks are mortal, with scant Test experience at scrumhalf and not much more in the back three. As New Zealand proved recently, the Boks are also not entirely immune to a last quarter comeback.

It is quite possible to imagine England surging back from a shaky start, setting up a breathless photo-finish in a contest potentially shaped by a contentious refereeing decision. If, instead, it is an embarrassing procession and Jones’s key-note selections fall flat, November at Twickenham could be a dark and stormy month. Will it be boom or bust for England’s patched-up contestants? Spin the wheel and place your bets.