Warren Gatland’s side solid, if unspectacular, in Cardiff 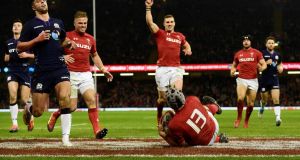 Wales extended an unbeaten home record against Scotland to 10 Tests as they defeated their Six Nations rivals 21-10 in Cardiff. Tries by George North and Jonathan Davies underpinned victory in the inaugural Doddie Weir Cup clash.

Full-back Leigh Halfpenny kicked 11 points to leave Scotland still without a win on Welsh soil since 2002 - the same year as Wales last claimed victory in an opening autumn fixture. Skipper Stuart McInally scored a try for the visitors, while assured outhalf Adam Hastings - son of former Scotland and Lions captain Gavin Hastings - booted a penalty and conversion, and Wales had to defend for long periods of the second half before subduing their opponents.

Australia are next on Wales’ autumn agenda in seven days’ time, with the Wallabies targeting a 14th successive win against Warren Gatland’s men.

Scotland, meanwhile, move on to face Fiji, South Africa and Argentina during the next three weeks, with Gatland and his opposite number Gregor Townsend acutely aware that improvements will be required.

Both countries missed key personnel due to injuries and unavailability - the game fell outside World Rugby’s autumn Test window and England-based players were ruled out - but there was still plenty at stake.

Scotland last won in the Welsh capital 16 years ago, and they arrived for a first autumn visit to Cardiff. Weir, who was at the game with his family, received a standing ovation from a 60,000-plus crowd when he brought the silver trophy out 15 minutes before kick-off. And it followed the Welsh and Scottish Rugby Unions agreeing to donate a six-figure slice of gate receipts to Weir’s My Name’5 Doddie Foundation, which was set up with a clear aim of supporting research to help find a cure for MND.

Halfpenny kicked Wales into a fourth-minute lead, but Scotland were keen to capitalise on possession by keeping ball in hand, and a sharp break by centre Alex Dunbar tested the home side defensively.

Wales, though, soon found an impressive rhythm and they almost extended their lead after fly-half Gareth Anscombe’s kick into space found North, but a foot on the touchline denied him a try. Halfpenny then landed a second penalty to double Wales’ lead, and gaps started to appear in the Scottish defence, with Ross Moriarty surging clear before being brought down by Dunbar’s scything tackle.

Halfpenny completed his penalty hat-trick after 21 minutes, before Hastings opened Scotland’s account four minutes later, but Wales’ escalating pressure did not go unrewarded. Half-backs Gareth Davies and Anscombe combined impressively, and the rest was all about North’s power as he shrugged off three Scotland defenders to claim a 34th try for Wales on his 77th appearance.

Halfpenny drifted the wide-angled conversion attempt wide, yet Wales could not prise open the floodgates and Scotland hit back six minutes before half time when McInally powered over after a close-range lineout, and Hastings’ conversion made it 14-10 at the break.

But Wales responded through an outstanding 48th-minute try that owed everything to Anscombe’s work off the ball before he freed Davies, who marked his first appearance following an injury-hit last 12 months by crossing unopposed.

Halfpenny’s conversion opened up an 11-point advantage, but Scotland’s attacking lineout remained a potent weapon and they were denied a second try when lock Jonny Gray was adjudged to have made an illegal double movement in touching down under a pile of Wales defenders.

It was a reprieve for Wales, but they did not help themselves when replacement hooker Elliot Dee was sin-binned 10 minutes from time for a technical offence, and then Peter Horne agonisingly failed to gather his brother George’s clever kick that would have resulted in a try.

1 GAA players spend just 2.5 seconds within 2m of each other during play
2 LeBron James among those to slam Drew Brees’ anthem comments
3 How a GAA club sprang up in east Belfast over Sunday breakfast
4 Connacht continue player hunt as six academy graduates promoted
5 Social distancing takes a back seat as fans return in Hungary
Real news has value SUBSCRIBE