Matt Williams: Money-raising exercise does little for rugby in America 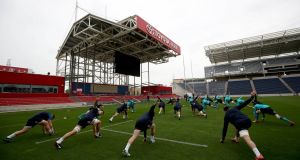 The Ireland squad preparing for the game against Italy in Chicago. “In a game that used to be about giving to the community, the local American rugby community has come last.” Photograph: Dan Sheridan/Inpho

For more than a century both Ireland and Italy’s greatest export was people.

Fleeing crushing poverty, hunger, political repression and social bigotry, millions, who were without hope in their native lands, left their families and homes. Spilling onto overcrowded boats, risking their all to sail the oceans, in the desperate search of a better life.

They carried with them only hope, because nothing could be as hopeless as their home country. To America, Argentina, Canada, Australia and New Zealand they fled in their millions, bringing with them little more than the clothes on their back.

Life was as hard as the sun-baked roads of western New South Wales and as unrelenting as the grinding factory life of the Chicagos mills. The environments in which the Irish and the Italians found themselves, were as alien to their mother lands as Guinness is to Chianti.

Two things tossed the Irish and Italians together. Their shared version of village Catholicism and the desperate need to make a “buck”.

The one asset they both possessed was to physically work harder than any humans should, to develop the schemes to grab enough money to feed themselves and their families.

Rugby was not part of Italian or Irish migrant life, but making money by almost any means was.

As the grandson of “church mice poor” Irish emigrants, I have heard the stories, seen the scars and witnessed the sacrifices. Myself, my brothers and cousins have benefited from them. How many times have we heard the cliché, “a better life for our children and grand children”.

The trouble with clichés is that mostly they are true.

Today in Chicago, the two communities once again come together for the simple purpose of making money.

Let’s preach the gospel of rugby to the American heathens – when the real motivation is to make a buck. Get some filthy lucre. Grab the Bugs Bunny money. Make and take some dough.

There is nothing wrong with making money. It sits very close to the heart of both the Irish and the Italians. Especially in the “home of the brave” market forces and the land of the “not free” universal health cover.

As a wonderfully pragmatic Marist brother said to me many years ago: “Money is the root of all evil....and the base of all progress. How much do you need?”

I lowballed him and he agreed straight away. Second lesson he taught me was: “You do not get what you’re worth, you only get what you can negotiate.”

The IRFU and the Italian federation have followed the advice of my dear Marist brother friend. They know there is a market, heaving with the Irish and Italian diaspora, and separating them from their dollars is a worthy and well negotiated goal.

So let’s not pretend that this game is an evangelical rugby cause. No Sexton, O’Mahony, Earls, Best, Kearney or Stander. It’s about making money.

The IRFU has it written, bold as gold, in its new strategic plan. Eighty per cent of all rugby income in Ireland comes from the funds generated by the men’s national team, while it only uses 12.5 percent of the cost.

So let’s keep that theme going. Rugby in the USA needs money.

I am very fortunate to have been a guest coach at a university in Maryland and entered into their wonderful rugby community. In my experience, rugby in the USA has a huge grassroots following but it is financially crippled. American rugby is also handicapped by the vastness of the country.

The distances between teams across their regions is so great, they regularly travel seven or eight hours to games.The people who run the clubs, schools and universities are passionate and love rugby. They reminded me what a rugby community gives to their team. In giving to their team, they are rewarded in return.

That has always been the case in rugby. We started to forget this when the game went professional. People started to ask “what can I take from the game? Instead of, “what can I give to the game?”

In the heart of American rugby, the people are giving, not taking. Coaches wash the teams jerseys, parents supply food for the long travel. Former players donate cash to buy rugby balls, players pay for their jersey. Referees help to put up the goalposts in suburban parks prior to matches. They all give to the game.

I am sure both the Irish and the Italian rugby teams will give their all at Soldier Field.

Sadly the event between the two international teams, representing the ancestral homes of millions of their diaspora, has all the trappings of a Wall Street corporate raider.

In a game that used to be about giving to the community, the local American rugby community has come last.