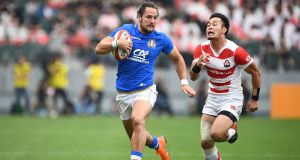 Italy’s centre Michele Campagnaro will captain the side against Ireland at Soldier Field in Chicago. Photo: Martin Bureau/Getty Images

A wing by inclination, he possesses the speed and agility that goes with that position and while a novice at international level he comes with a great deal of expectation and excitement.

He scored two tries during last season’s Six Nations Championship against England and Wales and has worked hard to improve in a defensive capacity.

After a stellar first season in international rugby in 2014 in which he excelled in the Six Nations, his career both at club and test level has been hampered by injury; no doubting his ability though.

He returns to the team after a three year absence and will be keen to take this opportunity to press his claims as Conor O’Shea looks to find a creative midfield axis.

He became the first ever recipient of the Pro14 Ironman award for the player who racked up the most minutes (1504) in the league last season, highlighting his durability and consistency of performance.

He has scored 116 points for Italy to date and can play fullback, centre or outhalf with the latter his preferred position. The Zebre playmaker is disputing the number 10 jersey with Tommaso Allan.

The much-travelled scrumhalf who has played for several clubs including Ospreys and Harlequins made his international debut in 2009 and has been in and out of the test team ever since. He is physically strong and a threat on the fringes.

Having spent seven years at Rovigo, his move to Benetton in 2016 coincided with his first cap for the national side that season. He has been handed a rare start in Chicago.

A tough, mobile hooker with a knack of scoring tries at club level, he is vying to be first choice hooker with veteran Leonardo Ghiraldini.

The English-born and educated prop was part of the Leicester Tigers academy before moving to and declaring for Italy and was the backup tighthead during last season’s Six Nations.

After a slow start to his international career in 2012 and playing for just one minute in the 2015 Rugby World Cup he has played 11 out of the last 12 internationals for Italy.

He was born in Irvine, Scotland and was educated in Edinburgh but studied at third level in Milan before declaring for the country of his Italian mother.

The South African-born player is making his debut having qualified under the three year residency rule. He is a strong physical presence on both sides of the ball.

The former South Africa under-20 international has played secondrow, flanker and number eight for the Italian side since making his debut in 2016.

Strong and athletic, he is a young player of whom good things are expected based on his pedigree at underage international level and he returns to the position he played at that age-grade having spent more time as an openside flanker at senior level.

1 Ireland v Scotland: Doris’ day as Caelan set for first cap
2 Gary Lineker: ‘60 is just a number, 70 is the one to worry about’
3 Six Nations: Pundits, journalists and players have their say
4 Niall Quinn and Gary Owens reassure FAI staff about future
5 Rafael Nadal keeps his cool as Nick Kyrgios goes out swinging
Real news has value SUBSCRIBE