Connacht hold their nerve for home win over Scarlets 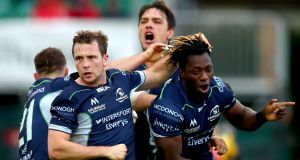 Connacht shot up the Pro14 conference A table after a significant home win against Scarlets, but nothing comes easy for Andy Friend’s men as they face an altogether tougher challenge in title holders and pace-setters Leinster next weekend.

On Saturday Connacht were told by Friend to enjoy their victory over the 2016/17 champions at the Sportsground before preparations for the current title holders’ visit begin.

“It was a good win out there, but we have to keep building, we cannot become complacent,” Friend said.”To get the win is a real plus, and I said to the boys ‘we will enjoy it, but temper it knowing we have Leinster next weekend’. It’s only early doors in the season, but to show that resolve and fortitude, and stick to the plan and get that last try, was extra special.”

Against Scarlets the stats tell the story – possession 68 per cent; territory 75 per cent. Centre Bundee Aki won the man of the match, yet it could easily have been the outhalf Jack Carty or scrumhalf Kieran Marmion.

Aki, in his first start, continued to “bull” proceedings.

“Our team this week was unrelenting and he was unrelenting as he continued to put the opposition under pressure with or without the ball, and that gives the rest of the boys massive confidence,” said Friday.

Aki set the tone, breaking through a crowded midfield before offloading in the tackle to supporting centre Tom Farrell to score. Right wing Cian Kelleher grabbed the second in the 25th minute after Connacht created an extra man with captain Jarrad Butler out wide, and Connacht were very much in the driving seat at 17-6.

Carty, with a 100 per cent success rate, and Marmion took control behind the scrum – Carty producing some pin-point kicks behind the defence to put Scarlets under pressure. Marmion’s ability to scoop possession off the ground epitomised Connacht’s appetite for possession; ditto his superb read to intercept a possible try-scoring opportunity for the Scarlets.

“Jack has got better with every game” said Friend. “The way he is controlling the game in attack and defence has been really impressive. He has a skill set which is immense, passes from both sides, kicks both sides, he can turn both sides too, and if you leave him alone he’s a running threat too, so we are starting to see that with him.”

As expected Pivac’s side demonstrated their confidence with ball in hand, running the angles to poach a try soon after Connacht’s second, with Johnny McNicholl profiting from a missed tackle. Scoring machine Leigh Halfpenny added the extras, keeping his side in touch. They did the same in the second half which Connacht controlled, and after a series of Carty penalties put them 26-13 ahead, Scarlets produced an end-to-end demonstration of clinical control, finished by right wing Tom Prydie to narrow the gap to 26-20.

However, replacement scrumhalf Caolan Blade continued where Marmion left off. Combining with the hard-tackling Sean O’Brien, he displayed a real doggedness at the breakdown to regain possession, and Niyi Adeolukun raced through to seal the issue.

“To hold their nerves, especially in the last eight minutes when Scarlets came within six, was one of the moments which tells you if the team is growing or whether it is stagnant, and for me we grew.

“It may look like I’ve come in with a magic wand, I haven’t. I’ve come in here and backed them, and they are doing it, the accolation should be thrown their way, but we have to keep building.

“The more we keep building the foundations, the confidence and belief comes. We are happy where we are at the moment, and know we have improvements to make, and we will keep working hard to get that.”