Waikato winger involved in domestic violence incident with his partner 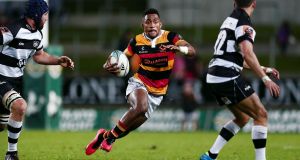 Sevu Reece of Waikato had been due to join Connacht in November. Photograph: Anthony Au-Yeung/Getty Images

It seems unlikely that Connacht’s prospective new arrival, Waikato winger Sevu Reece, will be joining the province in November on a two-year deal even though the 21-year-old Fijian was yesterday granted a discharge without conviction over a domestic violence incident that left his partner bloodied and bruised.

Reece was handed the discharge without conviction by Judge Denise Clark in the Hamilton District Court today, with reports in New Zealand stating Judge Clark had said a conviction would have ended the player’s contract with Connacht.

A brief statement by the province said: “Connacht Rugby and the IRFU are aware of media reports concerning Sevu Reece and his recent court appearance. We are currently seeking to clarify information around the situation prior to commenting further on the matter.”

Reece has been in prolific form for Waikato in the Mitre 10 Cup, scoring six tries in eight games, but having admitted to his actions on the night in question, the expectation is that he will not be joining Connacht now.

The court had heard that in the early hours of July 1st, a heavily intoxicated Reece was involved an argument with his partner of two years in the Hamilton central business district.

According to a report in the New Zealand Herald, Reece had yelled at his partner, chased her down the street and dragged her to the ground. She suffered bruising to the side of her face and waist and bleeding to her knee. But the Judge accepted that the victim had forgiven Reece, that the couple were undergoing counselling, Reece had admitted a problem with alcohol and had been sober for three months.

The Herald report added that Reece had expressed remorse and apologised at a restorative justice meeting and the Judge took into account his early guilty plea, the fact it was his first time before the courts, his apology and that his Connacht contract would help provide for his family.

Reece was ordered to pay his victim $750 within 28 days for emotional harm reparation. On the single charge of common assault, he was discharged without conviction.