The offload: TG4 pundits need to pitch up

Go for entertainment or cold blooded inquisition. Anything else is painful viewing 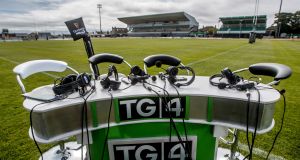 TG4’s coverage at the Sportsground on Saturday was sloppy. Photograph: James Crombie/Inpho

Where is the journalism?

Choose your channel. Former players and coaches as commentators have obvious value: take a leaf from Tony Romo’s playbook. The former Dallas Cowboys quarterback raps like he’s on the line of scrimmage. He calls plays before they happen. It makes for magical television. That’s the benchmark.

Now more than ever, TG4 need to pull their socks up before Eir find a groove. Eimear Considine is an astute addition but overall Leinster’s visit to Galway will go down as a lost opportunity.

Pointless pitch side chatter like Gavin Duffy wondering out loud to Tim Allnutt about the score being 3-0 is as good an example as the many others. The key element for any interview is to ask pointed questions rather than provide an answer, or way out, for the interviewee.

The choice is simple: go for entertainment or cold blooded inquisition. Anything else is sloppy and painful viewing.

Over on Eir it did look a little like Eddie O’Sullivan was preaching to the kids again. The former Ireland coach dropped Luke Fitzgerald and Tommy Bowe prior to the 2007 World Cup squad, shedding Peter Stringer during the pool stages but generation games aside Bowe is moulding a decent show.

O’Sullivan’s “yellow minimum” call for Scott Fardy or Sean Cronin, despite referee John Lacey stating the pair placed Robin Copeland on the ground does the game no favours. Granted, that’s a subjective view, and pundits expressing clear opinion should be encouraged.

It’s early days for Maz Reilly but she clearly understands the game, so the confidence should follow. Crucially, she asks questions.

By the numbers: 57 The record margin of defeat suffered by Ulster against Munster at Thomond Park on Saturday night.

It began as a documentary about Ireland’s Call - the Phil Coulter-penned Ireland rugby anthem that united no one and utterly fails to exist beside Flower of Scotland, God Save The Queen, Land of My Fathers and La Marseillaise with any credence.

Thankfully, 3 Rock Productions, Craig Doyle and Brian O’Driscoll, teamed up with TBI Media to develop that idea into Shoulder to Shoulder, an important documentary that explains how the island of Ireland remained a united rugby nation, even at the height of The Troubles when Ulster’s Willie John McBride led Irish players of all creeds onto a field.

The story begins with past and present Ireland captains, O’Driscoll (“Catholic, Dubliner”) and Rory Best (“Protestant, British citizen”) - “in different circumstances we could have been enemies.” – embarking on a journey through the murky border history; a chilling reminder that rugby did not escape the violent legacy of resistance to British rule.

Inevitably, O’Driscoll returns to April 1987 when Nigel Carr, the brilliant 27 year old flanker, had his playing career ended by an IRA bomb (“Somebody up on a hill”) which killed its intended target, Lord Justice Maurice Gibson and his wife Cecily.

O’Driscoll is able to retell this story so vividly because he’s one of the only people Dr David Irwin would return to the scene of the explosion alongside.

Quote of the week: “When I started in Leinster, lads ponied up on Monday and they were ready to go. A couple of years ago, in the Test match window, it was a Tuesday. Now, it’s probably Thursday in the week after a Test match before they are ready to go.” – Ireland S&C coach Jason Cowman on the evolving nature of rugby.

Mixed messaging from World Rugby is nothing new. In 2016 Brett Gosper (inset) , WR CEO, stated there was no “appetite” to extend the residency rule from three to five years. About three to five minutes later Agustin Pichot, WR vice chairman, said the exact opposite.

“There’s a growing belief less [games] may be more,” Gosper chimed-in recently on the international schedule conundrum. Turns out more test matches seem inevitable after a meeting of Gosper’s executive in Sydney. More pounding of limbs. More flights. More, more, more until the game bursts at the seams.

The Sunday Times reports a new 12 nation Tier 1 and Tier 2 competition, with promotion and relegation, is WR’s attempt to keep international windows relevant.

The World Cup every four years isn’t enough to combat the growing financial influence of the English and French clubs so something competitively serious, to replace current tour and test series formats, is needed to muscle into an already stuffed global calendar in July and November (there will even be a Grand final).

Any idea that creates more test matches at the Aviva stadium should garner Irish support as that’s financial fuel for the IRFU engine.

Prime rib for the ravenous gallery, increasingly dangerous for the gladiators.