Conor Murray back in Munster 23 for Connacht clash 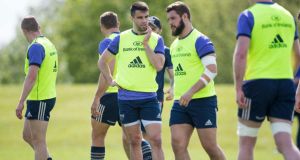 Conor Murray is back in the Munster squad this weekend. Photograph: Morgan Treacy/Inpho

Munster director of rugby Rassie Erasmus has made eight changes from the side that defeated Benetton Treviso for Saturday evening’s clash with Connacht at Thomond Park.

With James Cronin, Rhys Marshall and Stephen Archer remaining in the front row, Billy Holland returns to captain the side and partners Darren O’Shea in the second row.

The only other change in the pack sees Jean Deysel overcome a rib injury to start at blindside flanker. Academy Player of the Year, Conor Oliver, joins Jack O’Donoghue in completing the pack.

Angus Lloyd and Ian Keatley come in at half back with Keatley to make his 150th appearance for Munster, doing so against his former side.

In midfield, academy centre Dan Goggin returns to the starting lineup alongside Jaco Taute. The South African has been announced as one of six Munster players in the 2016/17 Pro12 ‘Dream Team’.

Naming a very strong bench with no less than six Irish internationals, Erasmus includes Conor Murray in a matchday 23 for the first time since Ireland’s Six Nations encounter with Wales back in March.

On the player injury front, following a scan this week, Dave O’Callaghan will meet with a specialist for the knee injury he sustained in the round 21 win over Treviso.

Connacht head coach Pat Lam has made eleven changes to his side to face Munster.

Tiernan O’Halloran, who was also named on the Dream Team, Tom Farrell, Cian Kelleher and Andrew Browne are the only players retained in the starting XV following the defeat to Scarlets six days ago.

Jack Carty and Kieran Marmion make up the half back pairing for the trip to Limerick, while last week’s try scorer Craig Ronaldson is named in midfield with Farrell.

In the back row, John Muldoon returns to captain the side and is joined by flankers Eoin McKeon and James Connolly.

Replacement prop JP Cooney will make his 50th appearance for the province if called upon from the bench tomorrow afternoon.

“With this being our final game before the European play off, there is no question that we need an improved performance in Limerick tomorrow. With quite a few changes from last weekend, it’s an opportunity for those guys selected to drive that improvement.

“Winning only once in 29 years in Thomond Park emphasises the challenge we face tomorrow. With the way Munster are playing as a team this season, there is no doubt that challenge has got even tougher.

“At the end of the day it’s a derby game with a lot on the line for both teams and we’re really looking forward to it.”