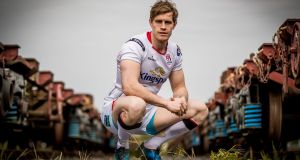 Andrew Trimble: “Maybe our skill level isn’t good enough? Maybe our mental resilience when we are up against it needs to be worked on? Photograph: Morgan Treacy/Inpho

Andrew Trimble is unable to tell us why Ulster will enter a 12th season without a trophy. He offers plenty of honest reflection but no solution.

“Yeah, it’s tough now, pretty depressing after Saturday’s game against the Ospreys” said the 32-year-old Ireland winger at a function for sponsors Kingspan that was supposed to coincide with safe passage into the Pro 12 semi-finals.

“That game more or less summed our season up in that we do a lot of good things – and we don’t want to lose that, we want to keep creating space and opportunities – but we just can’t get over the line, we can’t get that last pass. Our execution has been nowhere near what’s required.”

All this takes place on the eve of a largely irrelevant interpro against Leinster. Proof, if any was needed, is seen by the squad acquiescing as Les Kiss allows Rory Best (shoulder), Iain Henderson (elbow) and Jared Payne (ankle) get patched up before the Lions tour New Zealand.

“Maybe our mental resilience when we are up against it needs to be worked on. You could say all these things and find examples to prove them but the one thing you can’t say is that there is no heart in this team.”

Negative change arrives alongside a coaching overhaul as native sons Neil Doak and Allen Clarke are replaced by Jono Gibbes and Dwayne Peel. The enforced removal of Ruan Pienaar, after the IRFU refused the Springbok a third contract to finish his career in Belfast, still defies all logic.

Ulster do not have a scrumhalf to remotely compare with Pienaar, never have, so they have been forced to recruit excess Leinster players.

“As difficult a time as it is to replace Ruan and as negative a thing that is, potentially, we can use it as a positive to give someone an opportunity to stand up.

“There are a handful of lads who are there next year who will be fighting it out to put on that nine jersey.”

Paul Marshall, 32 in July, has been given a new contract and the injury-prone John Cooney arrives from Connacht while David Shanahan, like Cooney a Dublin-educated scrumhalf, has been exposed to the highest level this season (Aaron Cairns, Rhys O’Donnell and Johnny Stewart are the Academy options that Kiss says are not yet ready for senior rugby).

“That’s the obvious bit,” Trimble continued. “Anyone who has any inkling about rugby knows how talented Pienaar is and how hard he works and his game vision but what they don’t see is how good a lad he is off the pitch.

“We are just going to miss him around the squad. He is brilliant in the community, he does a lot of work speaking at events, he is very holistic and very good for us. He is going to be a big loss. Big shoes to fill.”

Ulster’s argument was that Pienaar, like Isa Nacewa in Leinster, would make the next generation better players. The IRFU flatly refused.

Kiss was at least able to confirm Pienaar’s recovery from a back spasm to play his final game for the province before his young family moves, reportedly, to Montpellier.

4 Disappointing Nations Cup set for a finale of ‘farce’

Jim McGuinness: Cavan need illogical courage and variety to down the Dubs 07:00
Matt Williams: Scrum stoppages turning rugby into a boring spectacle 06:30
Ireland retirement was ‘hardest decision’ for David McGoldrick 06:30
Evergreen: Johnny Sexton the latest Ireland outhalf to keep on keeping on 06:00
Disappointing Nations Cup set for a finale of ‘farce’ 06:00
Here is your handy guide to sport on television this week