Would a Pro12 and Premiership top two playoff work? 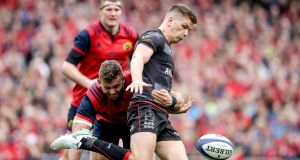 For once, the European club campaigns are aligned. The regular league seasons in England, France and the Pro12 finish this weekend, although if Premiership Rugby has its way from 2019-20 no player will be able to contemplate going on holiday until July.

The three leagues all have a play-off system, with the champions determined by how they perform over two weeks rather than eight months. Under the old system, the Premiership would have been a three-way tussle this weekend with Wasps and Exeter on 79 points and Saracens, who are at the Ricoh Arena on Saturday, two points behind in third.

In the Pro12, the leaders, Leinster, are three points ahead of Munster with both assured of a home draw, while in France La Rochelle lead Clermont Auvergne, their opponents on Saturday, by 10 points.

Clermont, fighting on two fronts like Saracens having made the European Champions Cup final, have paced themselves but need to win to ensure they sit out the first round of the play-offs. The system is more drawn out in France, with six teams involved rather than four.

When the Premiership adopted the play-offs in 2002-03, the main reason given was that with clubs shorn of their international players for three months of the season – more than one-third of the league campaign – the system was fairer on those who supplied a large number of players to England and other Test sides than first-past-the-post.

Not that the champions will revert to whoever leads the table at the end of the final round of matches from 2019-20 if the club season expands to 10 months, with the international weekends to be largely filled with Anglo-Welsh-South Africa Cup matches.

It would allow clubs to be at full throttle for virtually the entire Premiership campaign, but the play-offs are lucrative and Twickenham sells out for the final.

When Premiership Rugby introduced the system, it was not rapturously received. Wasps won the first three finals and beat the team that had finished top each time, appreciating that consistency was less important than peaking at the right time. Saracens will not finish top if Exeter win at Gloucester on Saturday, but would they have lost at Gloucester and Worcester, matches played during the Six Nations, had they been at full strength?

A team that finished fourth in the Premiership has only once won the final, Saracens in 2014-15, although Northampton and Leicester had previously made it to Twickenham. The Tigers currently lie in fourth place, four points ahead of Bath, with a trip to Worcester on Saturday to face opponents they have lost to only twice in the top flight.

They are 17 points behind Wasps and Exeter having mustered two bonus points in their matches against the top three this season, but they could be crowned champions. Unlikely, perhaps, but they are play-off perennials.

In all three leagues there is a gap between teams in the play-offs, never mind the rest

Stade Français are sixth in the Top 14 having won one away match in the league, at relegated Bayonne, and if they maintain that position in a madly congested table in which 10 points separate Castres in fifth and Toulouse, the mighty fallers, in 12th, they will have a chance to win the league.

In the Pro 12, Ospreys in fourth are 15 points behind Leinster and in all three leagues there is a gap between teams in the play-offs, never mind the rest. The question of whether the winners of a league should be decided by a knockout tournament, marathon runners having to turn into sprinters, will long be debated, but it will be decided by pay rather than philosophy.

Which is why the argument about losing international players for a significant chunk of the season has never been applied to the other end of the table in the Premiership.

Should a team that finishes fourth have the potential reward of a league trophy?

Had Worcester finished bottom, they could have cited the loss of their centre Ben Te’o to England in the autumn and for the Six Nations, but how commercial would a play-off between the bottom four sides be?

Should a team that finishes fourth have the potential reward of a league trophy? If Premiership Rugby succeeds in its bid to have a 10-month season, with international tours to follow, and clubs are able to pick from strength for all, or virtually all, of the league season, what merit would there be in a play-off system other than to plunder backers and spectators?

Why not, instead, have a play-off between the top two teams in the Premiership and the Pro12, first against second with the respective champions enjoying home advantage in the semi-final?

This season, it would mean two from Wasps, Exeter and Saracens against Leinster and Munster, and while there would be a chance of a rerun of a Champions Cup final, that prospect exists now: five of the European Cup finals have been all-French affairs, with the Premiership supplying the 2007 finalists and the Pro12 the last two in 2012.

It would be something welcomed more by the Pro12, which introduced the play-offs in 2009-10 and has yet to establish its final as a focal point of the calendar in the way the Premiership has, but it would provide a link between the two leagues that supply the Lions with players.

There would be a complication if the Premiership ends a month later than the Pro 12, which has no plans to expand its season from 2019-20, but if English clubs are talking about including South African Currie Cup teams in the Anglo-Welsh Cup, which would hold the appeal of a party political broadcast, why not look closer to home and let first equal champions?