Ulster give pride of Lions the weekend off

Payne, Best and Henderson rested for final Pro12 game of the season 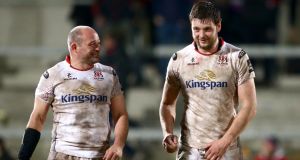 Ulster’s Rory Best and Iain Henderson will not play against Leinster this weekend. Photograph: James Crombie/Inpho

Ulster have decided to clear the pathway for their three British and Irish Lions tourists by standing down Jared Payne, Rory Best and Iain Henderson from the Pro12 dead rubber against Leinster at Kingspan stadium on Saturday.

Payne (ankle), Best (Shoulder) and Henderson (elbow) could have been patched up if qualification for the play-offs was a real possibility.

“JP is just not quite right,” said Ulster director of rugby Les Kiss. “In actual fact, like Rory and Hendy, they are carrying knocks. They couldn’t train earlier in the week. They could play for sure, but talking as a group with the players, we have decided not to play them and let them get those knocks right.

“Particularly for someone like Hendy, hopefully he’ll come back to the Ulster team having gathered a lot of experience. That decision has been made.”

Due to a string of injuries, including a lacerated kidney, Payne has played only 17 games for Ulster in the past two seasons.

“We possibly could have pushed it but at the beginning of the week we said ‘no, no.’ He’s probably two weeks (away). Next weekend he would have been alright. If we were in the hunt, he would have been up in there so he’s going to be absolutely flying (for the Lions).

“You’d hate for him to come on and do something. It’s a once in a life time experience and we have agreed internally.”

Kiss also ruled Stuart Olding out for eight to 12 weeks due to an ankle injury sustained against the Ospreys last weekend.

“Stuart will have to have surgery, which will be tomorrow, syndesmosis and other elements in the ankle.”

The 24-year-old, who has needed two knee operations in recent years, will not be adding to his four Ireland caps on the summer tour of USA and Japan.

Kiss was able to confirm that Ruan Pienaar has recovered sufficiently from a back spasm to play his last match for the province before the enforced move, by the IRFU not Ulster, to Montpellier.

“I spoke the medics this morning and he’s running around this morning. There shouldn’t be any issue with that one. He’s super keen to play.”

The IRFU refused Ulster’s repeated requests to give Pienaar a second contract extension despite the lack of similar quality scrumhalf replacement and the enormous impact off the field that the 88-time capped Springbok has made since coming to Belfast in 2010.

“We’ve accepted it and it’s just about building a bridge now.”

Paul Marshall, 32 in July, has been given a new contract and John Cooney arrives from Connacht. Dave Shanahan, like Cooney a Dublin born scrumhalf, has been exposed to the highest level this season while Aaron Cairns, Rhys O’Donnell and Johnny Stewart are the academy options.

From next season, Marcell Costezee and Arno Botha, the currently injured Springbok backrowers, will also add some much needed power to a pack that will be coached by Jono Gibbes when the Clermont Auvergne season ends. Former Wales and Lions scrumhalf Dwayne Peel arrives from Bristol to run the backline.

1 Car sliced in half but Grosjean survives huge crash at Bahrain Grand Prix
2 Jim McGuinness: There is a way to save championship and make it competitive
3 Once in a blue moon: Cavan’s overnight success 15 years in the making
4 Waterford turn Kilkenny upside down and inside out
5 Sordid murder of hurling brothers still resonates in south Galway
Real news has value SUBSCRIBE

Car sliced in half but Grosjean survives huge crash at Bahrain Grand Prix 15:11
Mike Tyson and Roy Jones Jr fight to a draw in Los Angeles 12:18
Limerick can count on the assurance that has eluded Galway at key moments 08:00
Once in a blue moon: Cavan’s overnight success 15 years in the making 08:00
Reshuffled France see off Italy to set up England final 23:04
Here is your handy guide to sport on television this week