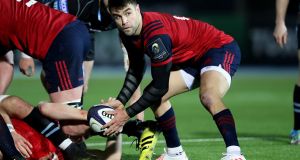 Munster’s Conor Murray: “I’m not a good spectator, especially when you know you can add value or you could be out there helping your team.” Photograph: Billy Stickland/Inpho

There are bad times to get injured and then there are particularly bad times. Being such a normally resolute player who is virtually an automatic first-choice for province and country, Conor Murray’s seven-week lay-off amid the trophy-hunting meat of the season has been especially ill-timed.

Compensation came by way of watching Ireland beat England and Munster defeat Toulouse but, unsurprisingly, Murray cut a particularly forlorn figure when helplessly watching Saracens end his province’s European journey a fortnight ago in the semi-finals.

“I’m not a good spectator, especially when you know you can add value or you could be out there helping your team. The England game was really tough to watch but it was really exciting. I was so happy for the lads to put an end to the English run, and deny them a Grand Slam, and to put in a big performance to finish the Six Nations was awesome. I was part of that campaign which was great.”

“It was frustrating with Munster as well, missing the quarter-final.

“I was named in the team and we were going well. It was just a decision by the medics that I wasn’t ready. Missing the semi-final in the Aviva [Stadium] was probably the most frustrating to be honest. Seeing the Aviva full of Munster supporters; the noise; the atmosphere; the potential to reach a final; the regret that you could have done something to help. Yeah, it was a terrible time to get injured.”

Murray is ready and raring to return for Munster this Saturday against Connacht or, failing that, a fortnight later in their home semi-final in the Guinness Pro12. He has resumed full training this week, taken full contact, and the nerve injury in his is no longer an issue in his mind.

Murray and Munster could not countenance missing out on another final. “Especially the season we’ve had, how hard we’ve worked, and the emotion attached to this season with Axel’s passing. That’s still a massive thing in our squad. It will be for a long time. To miss out on the European final – European rugby which is what Munster is based on – was horrible. It would have been awesome, so I think we’ve worked too hard to miss out on a chance to lift a trophy.”

“We’ve been through tough times over the last two years; we’re a new team, we’re performing well, we’re happy with the way we’re being coached. We’re delighted Rassie [Erasumus] is staying on. We can keep developing. We’re on an upward curve definitely. If we were to make a final it would be massive for us.”

Murray sustained the injury when tackling George North half-an-hour into Ireland’s penultimate Six Nations game, but he is adamant that playing on until the 47th-minute in no way exacerbated the injury.

“No, not at all,” he said. “I didn’t do any more damage. I was probably risking our team’s chances with my passing. The strength just completely went out of my arm, so it was the right call to take me off. But it didn’t prolong my injury at all.”

The cause of the “setback” in the course of Murray’s recovery was probably due to him “lifting heavier weights than I probably should have.”

Murray admits he was slightly worried when Warren Gatland said he would be reluctant to bring him on the Lions tour to New Zealand if he did not return to action for Munster, but nonetheless has never felt it would come to that.

His desire to be a major part of this tour is fuelled by his experiences in Australia four years ago. Of all the staging posts in Murray’s steadily inclining career path, none were bigger.

“Confidence-wise, the coaching I got down there, the belief I got in myself to be part of a Lions series-winning team, was massive. I came back to Ireland probably a new player, mentally more so than anything else. It didn’t improve my desire, it just gave me another ambition or goal to go after; to go back and get on another tour, get on the Test team and play more. You always want to do better than you did the last time.

He references the coaching and advice given him by Rob Howley, the 59-cap former Wales and Lions scrumhalf, as well as renewing acquaintances with Ben Youngs, a tourist four years ago, and Rhys Webb. Knowing that this will be an altogether tougher assignment adds to Murray’s sense of excitement.

“When you play the All Blacks you’re aware you’re playing the best team in the world, and you’re also going to be playing against some of the best club sides in the world, and that’s really exciting. We’ve got a really good squad going down there as well so we’ll be really competitive down there. I think we’ve got to gel really well and work really hard at the beginning to get on the same wavelength. It’s going to be an awesome experience.”

Conor Murray was relaunching Maximuscle in Ireland with a new range of protein bars. To celebrate the launch, Murray held two training sessions in the specially created Home of Gains gym, in partnership with RAW.

1 Once in a blue moon: Cavan’s overnight success 15 years in the making
2 Jim McGuinness: There is a way to save championship and make it competitive
3 Car sliced in half but Grosjean survives huge crash at Bahrain Grand Prix
4 Waterford turn Kilkenny upside down and inside out
5 Sordid murder of hurling brothers still resonates in south Galway
Real news has value SUBSCRIBE

Car sliced in half but Grosjean survives huge crash at Bahrain Grand Prix 15:11
Mike Tyson and Roy Jones Jr fight to a draw in Los Angeles 12:18
Limerick can count on the assurance that has eluded Galway at key moments 08:00
Once in a blue moon: Cavan’s overnight success 15 years in the making 08:00
Reshuffled France see off Italy to set up England final 23:04
Crossword Get access to over 6,000 interactive crosswords