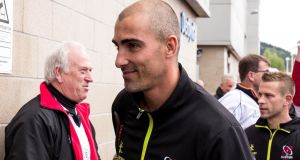 Ulster’s Ruan Pienaar will play his last game for the province this weekend. Photograph: Inpho

Roger Wilson, Ulster’s most capped player, will earn his 221st and final cap for the province when he starts at number eight in Saturday’s sold out clash with Leinster at Kingspan Stadium.

While qualification for the Guinness Pro12 playoffs is still mathematically possible, it would require the unlikely scenario of Ulster beating table toppers Leinster with a try-scoring bonus point, Ospreys losing to Scarlets without any bonus points, and Ulster making up a points difference of 73.

Wilson, one of an elite list of players who have made over 300 professional appearances, has enjoyed two stints at his home province, either side of a four-year spell at Northampton where he represented the Saints on 117 occasions.

Ruan Pienaar, who has become a favourite with the Kingspan Stadium faithful during the past seven seasons, will also make his final competitive appearance for the club on Saturday, as he adds to his tally of 140 caps and 877 points in the Ulster jersey.

Pienaar takes his place at scrumhalf in what is an unchanged back line with Paddy Jackson operating outside him in the number 10 jersey. Charles Piutau, captain Andrew Trimble and Craig Gilroy provide the back three firepower while the Irish international partnership of Stuart McCloskey and Luke Marshall continue in midfield.

In the pack, Wilson will be flanked by fellow loose forwards Robbie Diack and Sean Reidy. Kieran Treadwell and Alan O’Connor continue in the engine room for the sixth successive game, while in the front row, hooker Rob Herring and tighthead prop Rodney Ah You come in to join Andy Warwick.

Only four players start from the team that accounted for the Glasgow Warriors last weekend, although Jack Conan who was named for that match but was unable to start, is again selected at number eight.

Captain Isa Nacewa comes in at full back with Fergus McFadden and Adam Byrne both retained on the left and right wing respectively.

Noel Reid and Garry Ringrose come back into the centre with Irish internationals Luke McGrath and Joey Carbery likewise coming back in at nine and ten.

Both McGrath and Carbery also had big weekends last week. On Friday evening Carbery came off the bench and landed what turned out to be the match winning penalty against Glasgow.

In the pack, British & Irish Lions Jack McGrath and Tadhg Furlong come in on either side of the retained James Tracy, with Devin Toner and Hayden Triggs recalled to the second row.

In the backrow Rhys Ruddock comes in for the injured Dominic Ryan who is ruled out with a bicep injury. Josh van der Flier is again selected at open side with the aforementioned Conan in line to win his 50th Leinster cap.

The biggest game in their history? Ireland women v Ukraine - all you need to know 13:06
Dan Leavy could make Leinster return against Zebre 12:47
Tennis clubs in Republic of Ireland to close under Level 5 Covid-19 restrictions 12:02
Pep Guardiola laments Man City’s injury woes 10:26
Roscommon to fulfil Cavan fixture despite Covid-19 case 09:03
Here is your handy guide to sport on television this week