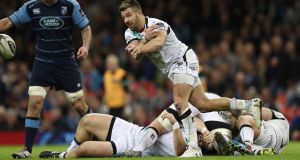 Rhys Webb: Conor Murray has a battle on his hands from the Wales scrumhalf who is as a real contender for that Lions’ Test slot against New Zealand. Photograph: Billy Stickland/Inpho

With no more than a passing interest in last weekend’s rugby I came across Ospreys versus Ulster. The outcome impacted the Guinness Pro 12 but that’s not what caught my eye.

Last Friday I teased the topic of pre- and post-ordained plays and how heavily coached teams insist on a myriad of pre-ordained plays. I’m convinced that the real value to be gained is what happens after these plays by playing rugby whilst subjecting defences to decisions.

Let’s ignore Ulster to focus on Ospreys’ Rhys Webb. Conor Murray has a battle on his hands from the Wales scrumhalf who is as a real contender for that Lions’ Test slot against New Zealand.

Of course it’s a matter of choice and choice springs from ideology. What type of scrumhalf does Warren Gatland want as both Murray and Webb are different and play differently?

Murray’s pre-ordained plays are heavily influenced by the Joe Schmidt ideology, for example the box kick perfected. Much unfair criticism was levelled at Duncan Williams against Saracens – it really doesn’t matter how often you box kick once the outcomes are to the team’s advantage.

With the opposition’s back three out of position turnover ball can be a good time to box kick. Likewise a dead ruck (recycle of well over 5 seconds) can be a good option to get out of the trenches with a chance of regaining possession. What was Williams to do off all the dead rucks where his team needed to speed up the recycle?

Murray has perfected the 40-metre five-second hang time kick, affording wingers time to cover the distance and engage. This is an Irish ideology and if it works, keep doing it.

The challenge for Murray is Webb, akin to Argentine Agustín Pichot appears more accustomed to playing after the pre-ordained plays. Against Ulster, Webb consistently employed a variety of plays to utilise the options his team afforded him. In this way Ospreys and Saracens are very similar.

Typically Webb went the same way but each time he picked the ball from the base he either passed immediately or didn’t pass immediately!

For the former normal rules of scrumhalf play apply (feet position, etc) where speed of delivery was key. But for the latter he’d carry around the corner and immediately square up his shoulders to the defence, appearing to be looking for a gap.

That he carried in both hands and his intention was to pass outwards was not evident to the pillar defenders because Webb looked like a man on a charge.

This is the first key difference to many teams; place doubt in the defenders who are typically arriving fatigued just in time to observe, orientate and adjust to the oncoming attacking player.

As he was doing this two fatties set up outside him with his outhalf and two more fatties outside them.

Forget the elite game for a moment. Last week I spent an hour working these options with Old Crescent under-18s where for the first time (mea culpa) the scrumhalf was aware of his shoulder orientation and how that presented problems for the defence.

All of which was useless unless the two runners understood their role. Unfortunately many receivers think their role is to first of all not drop the pass and then on catching, bash into the fringe defence. This is very hard work especially against Saracens when it is brave but stupid.

But if Webb was their scrumhalf then their role would be to hit the line as flat as possible whilst watching the fringe defence and more particularly their shoulders. If any one of the fringe defenders bit on Webb by turning shoulders in towards him then they were vulnerable so the receiver’s line should target that shoulder. It would be Webb’s job to hit that receiver.

So if the fringe defence is sleeping and the ball is quick enough the scrumhalf can run himself. Or, he can hit the above receiver who has picked the best line to expose the defence, even only by a yard; that’s enough to guarantee a line break, an offload or at least a quick next ruck (less dead rucks for Williams).

But there are three receivers (including the outhalf) so scrumhalf can hit either one, wide or short in the knowledge that the other will be selling a carry but will immediately be available to support.

They can also tip on pass to each other creating more defensive indecision. In tandem the ‘outhalf’ must run a line that compliments the inside runners whilst also expecting to receive. Should the outside fringe defender bite on the fatty he is now vulnerable to the outhalf receiving. The pass would be flat but behind the two fatties.

If the inside fatties have sold their lines, the outhalf receives and mimics the scrumhalf with the two outside him and his first centre; this exact play Ulster employed against Ospreys. All the while an inside Gregan ball to a hidden winger can add another option. Webb and Ospreys repeat this ad nauseam.

Very few in the U-18s group had an awareness of the above; fewer still read the fringe defenders and none had the confidence to do all the above on the gainline. When are these skills that can be employed throughout the pitch at any phase worthy of learning and practicing?