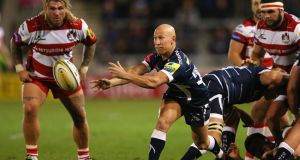 Former Ireland scrumhalf Peter Stringer is set to leave Sale Sharks at the end of the season. Photo: Getty Images

Peter Stringer will leave Sale Sharks at the end of the current season after two years with the Premiership club.

The 39-year-old scrumhalf is part of a 14-strong group that were announced on Thursday afternoon to be leaving the club at the end of the current term.

The Cork man won the club’s player of the year award last season but has made just four starts this season.

“They have been great for the club, the squad and the supporters,” Sale director of rugby Steve Diamond said.

“Nearly 200 caps between them and have helped their team mates and the youngsters coming through so much.”

After leaving Munster in 2013, Stringer has enjoyed spells with Saracens, Newcastle, Bath and Sale.

Among those also leaving the Sharks are Sammy Tuitipou, Sam Bedlow, Magnus Lund and Jonathan Mills.