Munster lead the way with six players, while Ulster and Leinster Rugby have two each 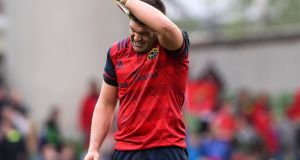 Munster’s Billy Holland is one of six players from the province named in this season’s Pro12 Dream Team. Photograph: Billy Stickland/Inpho

Munster leads the way with six players in this season’s Pro12 Dream Team.

Rassie Erasmus’ team, currently in second place in the Pro12 ahead of the final round of fixtures, are already guaranteed a home play-off.

Centre pairing Jaco Taute and Rory Scannell both make the team, as do props Dave Kilcoyne and John Ryan. Billy Holland is rewarded for his excellent season in the lock, with Tyler Bleyendaal taking the number 10 position.

Both Ulster and table toppers Leinster have two players selected, and along with the Scarlets that is the second highest allocation.

Charles Piutau is named on the wing, with his Ulster team mate Ruan Pienaar selected at scrumhalf, ahead of his final game for the province this weekend.

While Leinster’s two representatives are in the backrow, Dan Leavy and Jack Conan, who have both had excellent seasons.

Despite scoring 20 more tries than any other side so far in the Pro12, no Leinster back makes the team.

Fullback Tiernan O’Halloran is the only player from last year’s champions Connacht to be included.

Rory Sheridan, head of sponsorship for Diageo Europe, was chairman of the media panel, which comprised of journalists and broadcasters from across Italy, Ireland, Scotland and Wales, who voted for the Dream Team.

Eligibility for the XV required a player to have made at least 10 appearances in this season’s Pro12 championship.