‘It’s hugely disappointing, to progress you’ve got to play as many test matches as possible’ 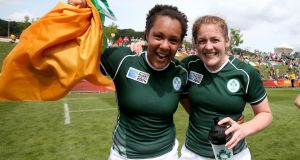 Former Ireland players Sophie Spence and Fiona Coghlan have spoken out about the IRFU’s rejection of a women’s Test series in Australia. Photo: Dan Sheridan/Inpho

Renowned Irish rugby players Sophie Spence and Fiona Coghlan have expressed outrage at the IRFU decision to reject a women’s test series in Australia alongside the men’s tour.

“It’s extremely frustrating,” said Spence, a nominee for World Player of the Year in 2015. “I was still part of the squad when it was mentioned that the women might be touring with the men, and we got very excited, and then it came out in a statement that it was a mistake.

“It’s hugely disappointing because to progress you’ve got to play as many test matches as possible. They also need the experience of playing games abroad. Remember Ireland still need to qualify for the next World Cup.”

Australia are seeking to host the women’s World Cup in 2021.

“I do think we are going to be left behind,” added Spence.

The IRFU’s reason for declining what would have been a historic series was to “focus on November fixtures to build to the Six Nations.”

The Irish Times understands that the series was first suggested by Australian Women’s Rugby president Josephine Sukkar in October 2017. The IRFU, who are sponsored by Aer Lingus, were expected to cover the women’s flights but Sukkar, whose company Buildcorp sponsors Australian rugby, would have covered accommodation.

Sukkar previously pulled sponsorship of the men’s National Rugby Championship in Australia because Rugby Australia failed to deliver a female equivalent (the Super W was subsequently formed in 2018).

“We have strong female CEOs in Ireland who are heading up sponsorship of various sports,” Spence continued. “You would like to think they could be a voice to say, ‘I want to match what we are doing for the men. Why aren’t we doing this? I am a female leader and equality is both men and women together.’

“You want girls to be able to pick up a ball at the same age as boys and have the same opportunities.”

The Irish Times sought the view of Annie O’Leary, CEO of Vodafone Ireland, who are a principal sponsor of the Irish men’s team. In a statement a spokesperson for Vodafone said: “The scheduling of fixtures and tours is a matter for the IRFU.”

“Is that why we play sport, because it’s commercially viable?” asked Coghlan, who captained Ireland to a Grand Slam in 2013. “The men’s rugby team generate a huge amount of income but they didn’t until they went fully professional around 1999, 2000. Did we ever say back then, ‘We shouldn’t support men’s rugby as they are not bringing money in because they are not professionals?’

“I get why the tour was turned down even though accommodation was offered. It’s a financial thing. But coming out saying it was to focus on November internationals . . . If there was some strategy around it I’d be okay with that but there is no strategy around it.

“The women’s team don’t bring in any money, I get all that, but if there was just a little more disclosure and people knew where the women’s game sat within the IRFU this would be easier for people to take.

“If they do come out with ‘the girls might not be able to take time off work,’ it should be noted that nobody asked them. The girls would only be delighted to use their annual holidays to go over to Australia and play a three test series.”

The 2017 women’s World Cup, held in Dublin and Belfast, concluded eight months ago but subsequent events already show the tournament as the sport’s launch pad towards professionalism. However, the IRFU, thus far, have decided not to pursue the same path as the Back Ferns, the Red Roses and even the Wallaroos.

The IRFU’s review of the tournament, when Ireland finished a disappointing eighth, was not relayed to the players and when the “part time casual” advertisement for a new coach caused uproar a committee under Mary Quinn and Su Carty was formed to recommend a future strategy for the game in Ireland.

The recommendations of the Quinn/Carty committee were submitted in March but will not be published.

“Those recommendations now are being considered with a view to pushing them into the women’s part of the overall IRFU strategy,” said Quinn, the only female member of the IRFU committee. “We are hoping a separate action plan will evolve from that.”

“I don’t understand why they wouldn’t publish it,” said Coghlan. “If you are not honest about where you are at and where you want to go I don’t think we are going to see the progress we need. If are reviewing something you have to look at the ugly parts, you can’t hide them away. People are giving out anyway, so let them give out about the truth.

“At the moment I feel like all we are doing is fire fighting. There is no path. Whether it comes in this review, I don’t know.”

Asked about the IRFU turning down the chance to send the Irish women to Australia, Quinn said: “It is difficult for me to comment on that. The high performance side look after the representative teams and they have a plan to prepare the women. My side of the game is the domestic side.

“Following the [unpublished]review there have been several recommendations made to the IRFU that are being considered right now with a view to progressing the development side of the game and making sure we have many girls and women playing at whatever level they want to with a clear pathway for them.

“That’s my job - to make sure things actually happen.”

Quinn reiterated she is unable to reveal what these things are as all the information is contained in an internal review document.

“I hate using the word barriers,” Coghlan added, “But there are still barriers where young girls can’t see playing sport in Ireland as a something they can progress at, not really.”

“Sick of staying quiet about missed opportunities for shared learning. Been working on a paper investigating a model of promotion and development in women’s sport that could be sustainable for women’s rugby in Ireland, but what’s the point? A key characteristic of a successful model is integrating with the men.”

“Wow! Not a great morning read but yet somehow doesn’t surprise me! Must be part of the grand master strategic plan for the growth and development of the game #stillwaiting #legacy.”

“Very little has happened in Ireland since the World Cup to suggest that the IRFU are stepping up their commitment to women’s rugby, which is the legacy you expect. We are now patiently awaiting the results of a vitally important review which should be published in full and lay bare the deficiencies that need to be addressed and how. Unfortunately if previous form holds, this will be nothing other than a sugar coated PR effort without the serious and credible proposals we need to build a sustainable 15s game.”

“This could have been the chance to show that ‘genuine commitment and effective action’ that was requested by the people who put so much into the sport in Ireland. Is it a business that is only supporting a pathway for one gender still.”