'I felt really happy here and it was an easy decision, a quick decision like my last contract' 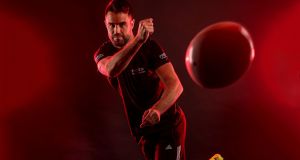 As the world’s best scrumhalf over the last four or five years and at the age of 29, Conor Murray could have been justified in at least sounding out his financial value abroad, especially with French clubs. But in confirming his projected return to action for the end of November/early December, such was Murray’s desire to be part of future success with Munster and Ireland that he wasn’t inclined to test the water elsewhere before recently signing a three-year extension until 2022.

“I didn’t have any interest. I genuinely wanted to get it done. I felt really happy here and it was an easy decision, a quick decision like my last contract,” he said. “No sniffs, or didn’t go looking.”

He may be close buddies with Simon Zebo, and had been over to Paris a couple of times this season to see him play, but he wasn’t tempted to follow suit.

“No, I’m being honest. Zeebs is loving life in Paris and that’s his thing. That’s for him and everyone is different. My thing is I want to stay here and play with Munster and be involved with Ireland as much as I can because it’s an unbelievable buzz around it, particularity the national team. It’s something you want to be a part of, and you’re at home, you’re playing for your home province.”

Murray was an aspiring 17-year-old scrumhalf at St Munchin’s College when in the Millennium Stadium with his dad to see Munster finally win a first Heineken Cup in 2006 by beating Biarritz. He subsequently broke into Munster’s first team for the run-in to their Magners League title of 2011, playing all 80 minutes of the final against Leinster at Thomond Park, but no trophies since. It’s an itch he is desperate to scratch.

“Big time. If I finish my rugby playing career in Ireland having not won anything with Munster since 2011 it would be a major annoyance. It would really get to me. I’ve said it for years, there’s something building but I think we definitely have the player pool now.

“I’m very confident in the coaching staff we have now, and we just have to bring it together. It’s just that we’re dealing with Leinster and they’re the best team in Europe, and they’re your neighbours, so that’s what we’re always competing against. But we made the two semi-finals last season so we’re close. We’re not a million miles away.”

He also speculated aloud as to how his current injury might have been managed in France, and whether there would have been pressure on him to play.

Being obliged to watch the autumnal series will further his desire to complete his rehab and return, though he says it’s always a difficult one in November because “we haven’t been together since the summer”.

While he believes this is the best Irish squad he has been part of, Murray maintains they need to achieve more to be considered the best Irish squad of all time. “You would have to wait and see, you would like to say ‘yes’ but you have to do it over a longer period, definitely.”

But he believes “we have another few gears in us too”. Hence, Murray would have aspirations to go beyond a World Cup semi-final.

“We have beaten most teams in the world, every team in the world really over the last while, and on our day we are capable of it and getting that consistency right. Obviously because we haven’t got past the quarter-final that would be a big milestone and that’s something in your head. But we know that on our day we are a top, top side so to set a ceiling at that, I don’t think that’s what we do know now.”

Murray has targeted a return to action for Munster away to Zebre or at home to Edinburgh at the end of November, thereby making himself available for their Heineken Champions Cup back-to-back meetings with Castres in December.

In the absence of specific information about his injury, the rationale for which he also explained, all sorts of rumours had circulated about his well-being and the reasons for his absence.

He explained that the uncertainty over the length of his absence was the reason for limiting information about his injury rather than a desire not to keep his medical data private.

He admits that the extent of the resulting rumours took him by surprise, and Murray even had to re-assure relatives that none of the rumours were true. But rather than make any public declaration to try to dispel them, Murray felt that the rumours didn’t merit a response.

“It was probably just fellas talking in the pub and making up things. I remember when Paul O’Connell was injured with his groin and there was all sorts of things being said about him because he was out for quite a long time. Thankfully I’m close to a return and there isn’t much chance of any more rumours to be made up.”

Nor was Murray worried at any stage that his neck injury could have been career threatening.

“It wasn’t like that. It was either ‘you’ll be grand in four weeks, or it might take a little longer or a lot longer’. I never really worried about anything like that. I knew I’d be back; it was just when, and getting to grips with it.”

Pinergy have teamed up with Conor Murray for the 2018/2019 season as part of its #WeAre16 campaign.