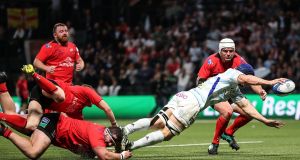 Modern day rugby in a modern day setting. In the enclosed setting of the Paris la Defense Arena, with it’s all-weather pitch, the onus on the home side is to attack and with Ulster having a similar mindset, this was wild and loose from first to last.

It’s a rugby venue but, more akin to a giant cinema given the big screen which takes up one unattended end of the arena, not as we know it, with no natural light and practically no natural sound either. The band provided a constant din, interrupted only by drum beats in isolation or an occasional blast from a trumpet.

Beforehand, Dan McFarland had declared you cannot be “shy going to Paris”, which seemed apt. Instead, Ulster would have to play with ambition. “You’ve got to look to take them on and play your game and see where it takes you,” he said, and Ulster were true to their new head coach’s words.

They may have lost an entire backline since last season but they are unearthing a good new one, as well as some forwards who are good on the ball. Ulster produced some eye-catching running rugby, varying the point of attack with the variety of their running lines and tip-on passes or offloads, and also using the full width of the pitch.

Billy Burns was the creative hub at much of Ulster’s best work with his inventive handling and kicking game, but having taken a knock last week against Leicester eventually made way early in the second half here. Will Addison and Michael Lowry were also lively, elusive running threats throughout, as of course was Jacob Stockdale, and Marcell Coetzee brought some thunderous carrying to the party.

They were only outscored by five tries to three and had more clean line breaks, 12 to nine, and offloads, 19 to 16.

Running from deep and from the off, Ulster daringly struck twice for tries early on – the second time while reduced to 14 men to lead 12-3. But they were hamstrung by their weak set-pieces; their scrum crumbling under the weight of Racing’s juggernaut pack, and Rory Best’s throw also coming under huge strain from the pressure exerted by the home side’s famed defensive lineout.

This also meant that when Ulster’s ambition backfired and they coughed up possession in their own territory, they paid a heavy toll.

And, of course, in all of this Racing have assembled an expensive array of inventive and quick players, behind a more explosive array of heavy runners up front, with Finn Russell taking the ball to the gain line and offloading at will. He has kindred spirits in an eye-wateringly potent back three, who contributed three of Racing’s five tries.

Racing weren’t long in stating their intentions, a prolonged passage of probing and recycling from well inside their own half, with Russell pulling the strings, and with both a cross kick to Simon Zebo on the left, and a little grubber for Teddy Thomas to reclaim.

Russell then took the ball to the line and popped the ball to the 118kg, 20-year-old Georgian loosehead Guram Gogichashvili who spoke neither French nor English when he arrived in the summer, but has picked up some French. He’s picked up some running skills too, timing his run to make a surprisingly nippy break before Racing overplayed their hand out wide.

Then, true to McFarland’s word, from their first platform of any hue – namely a scrum outside their 22, Burns worked a wraparound with Stuart McCloskey to find space in the Racing defence which Lowry exploited with a pacey line from fullback.

When the ball was worked back quickly infield, Racing were again stretched and Addison straightened and offloaded inside for the supporting Dave Shanahan to score untouched by the posts. Burns tapped over the conversion.

They paid the price for allowing Russell’s restart to land without being claimed, Leone Nakarawa latching onto the high bouncing ball and Russell landed a penalty for not rolling away.

Racing lost Bernard Le Roux after a nasty collision with his team-mate Henry Chavancy, and his replacement Fabien Sanconnie was not long in the action before he was speared in a clean-out by Nick Timoney. The manner in which the crowd howled in derision at a mere yellow card demonstrates how the game’s climate has changed this season, but as Timoney had released Sanconnie before he hit the ground it was sensible officiating by Nigel Owens.

Within moments, Thomas committed a similar offence on Stockdale, and arguably drove him into the ground more, but was merely penalised.

To their huge credit, Ulster promptly struck again with 14 men.

Burns initially did well to retrieve loose lineout ball, before the outhalf crosskicked for Craig Gilroy to gather. Although he couldn’t effect a try-scoring offload to Lowry, from the recycle Burns crosskicked with just as much deft precision to the left, where Thomas had meandered infield and Stockdale gathered to score. Burns missed the conversion, but at 12-3 to Ulster, the Defense Arena was stunned.

Ulster sought to run turnover ball from deep, working the ball across the line to the right and then to the left where, alas, Stockdale knocked on after their advantage had run out. Racing turned the Ulster scrum back on the visitors’ loosehead side thereby making what seemed a narrow blindside bigger. Antonie Claassen picked up from the base with Teddy Iribaren, Racing’s scrumhalf in last season’s final against Leinster and an early replacement, in support to convert a routine two-on-one against the exposed Stockdale.

Within four minutes they scored again, Juan Imhoff coming in off his wing to cut through off Russell’s inside pass, beating Iain Henderson’s tackle, and from the recycle Olivier Klemenczak bounced off Stockdale’s tackle to veer infield. He passed off the deck for the supporting Claassen to score by the posts.

Russell converted both tries and added a penalty with the last kick of the first half when the Racing scrum obliterated the Ulster pack on half-way. Suddenly it was 20-12 to the home side at the break, and the start to the second half was pretty ominous for Ulster too.

Racing went through the phases inside Ulster’s half and had an advantage for a knock-on by Stockdale from which Iribaren floated the ball infield where Klemenczak gathered in a quasi fullback position. With almost alarming ease, he stepped two of Ulster’s biggest names, Henderson and Coetzee, to cut through the heart of the Ulster defence and Imhoff was in support for the easy run in. Russell converted and added another penalty for a deliberate knock-on.

Ulster kept trying to play with ambition, Addison leading one break out to link with Lowry, before Stockdale, Lowry and Shanahan combined, initially from close to the Ulster line, and inside the final quarter put together two sustained phased attacks which used the full width of the pitch and showcased their skill-set.

But instead it was Racing who struck twice more, from scrums in their own 22 and in Ulster’s, as first Russell chipped, gathered and found the trailing Thomas on a switch to score untouched from 50 metres out.

Zebo, his leg heavily strapped from a first-half injury, had showcased his value with that booming left boot and one audacious counter-attack from deep, and joined in the try-scoring fun. There was little doubt that execute from an attacking five-metre scrum, Iribaren and Ben Volavola working Zebo into plenty of space to run in past Lowry with Thomas a spare man to this right.

Zebo pointed cheekily at Lowry as he ran in the try, but apologised afterwards to the exciting young Ulsterman. This must have been quite an experience for the 20-year-old.