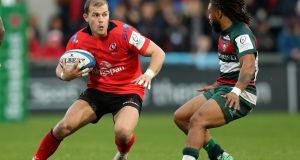 Ulster’s Will Addison has been named in Joe Schmidt’s squad for the November internationals. Photograph: David Rogers/Getty

Joe Schmidt has named a 42-man squad for November’s international series, including an uncapped trio of backs in Will Addison, Sam Arnold and Ross Byrne.

As expected, Conor Murray misses out, with the scrumhalf confirming on Wednesday morning that he expects to return to action with Munster at the end of November.

Ulster scrumhalf John Cooney has been named in the squad along with Leinster's Luke McGrath and Kieran Marmion of Connacht.

Addison is rewarded for some standout displays in the Ulster midfield since his signing in the summer from Sale, while Arnold has impressed with Munster since his arrival from Ulster.

Leinster outhalf Byrne was part of Ireland’s summer tour to Australia but did not play as Ireland completed a series victory over the Wallabies. There is no place in the squad for Munster fullback Mike Haley.

Ireland get their autumn series underway in Chicago on Saturday November 3rd when they take on Italy at Soldier Field.

They return home to take on Argentina, New Zealand and the United States on the following three Saturdays.